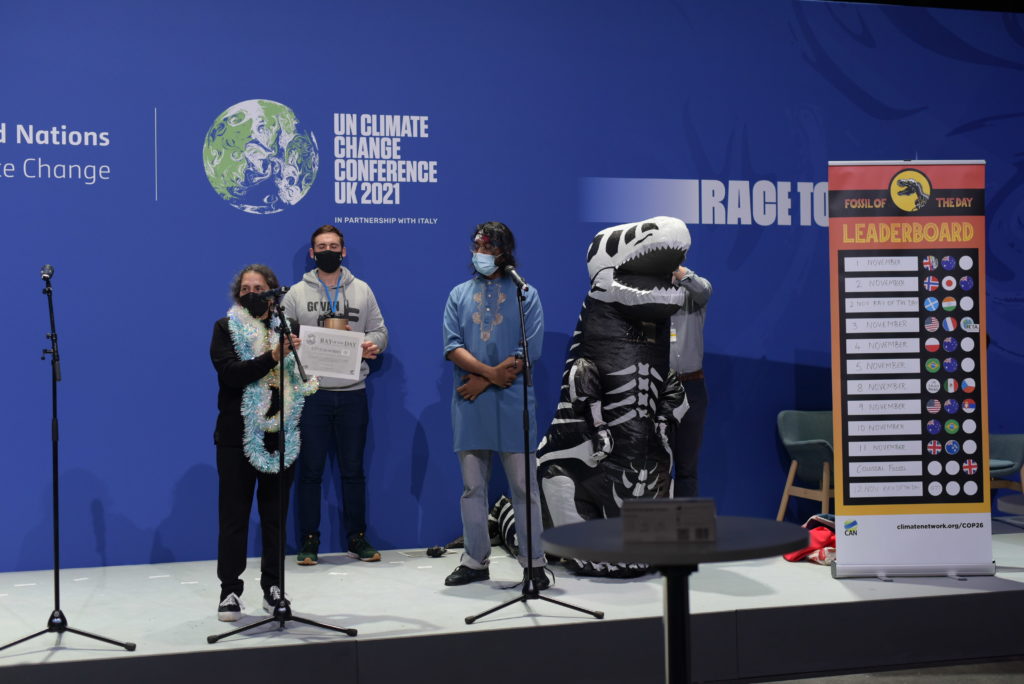 It will come as no surprise to regular fossil readers that Australia would come out on top in the prestigious final of the COP26 ‘Colossal Fossil’ hall of shame. After making an appearance on the very first day, they’ve chalked up another five podium finishes over the past two weeks.

Such breathtaking climate ineptitude started just days before they’d even arrived, with a net zero 2050 announcement lacking an updated 2030 target or the policies to get there. Their subsequent performance resembled parts of the Australian outback: a barren wasteland, devoid of anything remotely resembling an idea, strategy or policy on fossil fuels, energy or transport.

We should’ve seen this as a sign of things to come but held out hope for something (apart from the coffee machine in the Australian Pavilion) to cheer us up. Instead, at every turn, Scott Morrison and his band of merry fossil fools either failed to sign up to a progressive phase-out pledge or made an announcement that was better suited to an oil, gas and coal convention.

An excuse for not putting their hands in their pocket to help finance loss and damage in poorer countries has been that there was work to do down under with indigenous communities, Pacific Island neighbours or other groups at the front line of climate change. We’re not sure where, or when, this work’s happening but there are communities still living in tents after the climate-induced wildfires. Is the cheque in the post?

Over the past days, we’ve listed many of these epic fails that really don’t bear repeating again. We’re truly speechless Australia. Surely things can’t get any worse. Can they….?

Leadership or Hot Air? Second place in the Colossal Fossil Awards goes to the US

Biden’s Climate Summit back in April looked like the dawn of a new post-Trump era, especially in light of their historical contribution to the climate crisis. The mood music was set, candles lit and we waited for them to come to Glasgow and seduce us with real action.

But then we spotted an interesting approach to climate negotiations – say one thing then do another. There was plenty of ‘talking the talk’ but the walk was more of a pathetic shuffle by Biden, 12 cabinet secretaries, and a phalanx of negotiators.

There was an announcement on an end to financing fossil fuels abroad, but none on a domestic coal phase-out or a withdrawal of support for oil and gas expansion back home. As one of the largest oil and gas producers in the world, they call on developing nations, with high levels of energy poverty, to ditch coal whilst appearing unwilling to move beyond oil and gas themselves.

Developing countries’ calls for appropriate levels of loss and damage finance have not been met. The US has consistently prioritised text on mitigation whilst refusing to take responsibility for its own historic contribution to the crisis. Grossly inadequate levels of aid and blocking the Glasgow Loss and Damage Facility, amongst a litany of other violations, have all contributed to their inauguration into the 2021 Colossal Fossil final.

When Alok Sharma uttered those five magic words, telling the world that under the UK Presidency this was going to be ‘the most inclusive COP ever’, little did we know that it was going to be the exact opposite.

From day one, they managed to make a mess of most things. Civil society denied access to press conferences or negotiations, lack of provision for those with disabilities, shambolic logistics, endless and freezing queues, a farcical ticketing system, and a Prime Minister showing “leadership” by jetting back to London to have dinner at an exclusive men-only London club with his old journalist chums  – very bad form old chap.

Observers have cited a lack of ambition and willingness to sacrifice negotiations just so the UK  can wave a piece of paper in front of the world’s media containing meaningless promises. They have ignored our cries for prioritising safety and a solid response to the climate emergency putting first the needs of vulnerable communities already dealing with loss and damage from climate impacts. They have not heard us saying  “no deal is better than a bad deal.”

Whilst it remains to be seen whether anything truly groundbreaking remains on the text table as these talks conclude, we can only hope for better outcomes (and better places to go diving) in Egypt next year.

Ray of the Day for the G77 for tabeling the Glasgow Loss and Damage Facility.

The G77 is made up of a disparate group, from small states to larger countries, all bound together by a vulnerability to climate impacts. The pandemic severely limited their ability to coordinate prior to coming to Glasgow but despite these challenges, they came here prepared to pull the rabbit out of the hat – and they did just that.

So we salute them with our ‘Ray of the Day’ for their leadership in finding solutions to support vulnerable people and communities to tackle loss and damage. Against a tide of uninspiring progress elsewhere, they tabled the “Glasgow Loss and Damage Facility” to move negotiations, seeking to provide technical and financial assistance to address loss and damage particularly amongst vulnerable communities already reeling from devastating climate impacts, forward.

Philanthropic organisations have already offered initial funds to support this marvellous initiative. It’s now time for others, such as the considerably deeper pockets groups, especially richer nations most responsible for global warming emissions– to follow the G77’s inspiring lead.

About CAN: The Climate Action Network (CAN) is a global network of over 1,500 Non-Governmental Organizations (NGOs) in more than 130 countries working to promote government and individual action to limit human0induced climate change to ecologically sustainable levels. www.climatenetwork.org