Letter to IEA Director: Including a 1.5oC-aligned net-zero scenario in the World Energy Outlook 2021 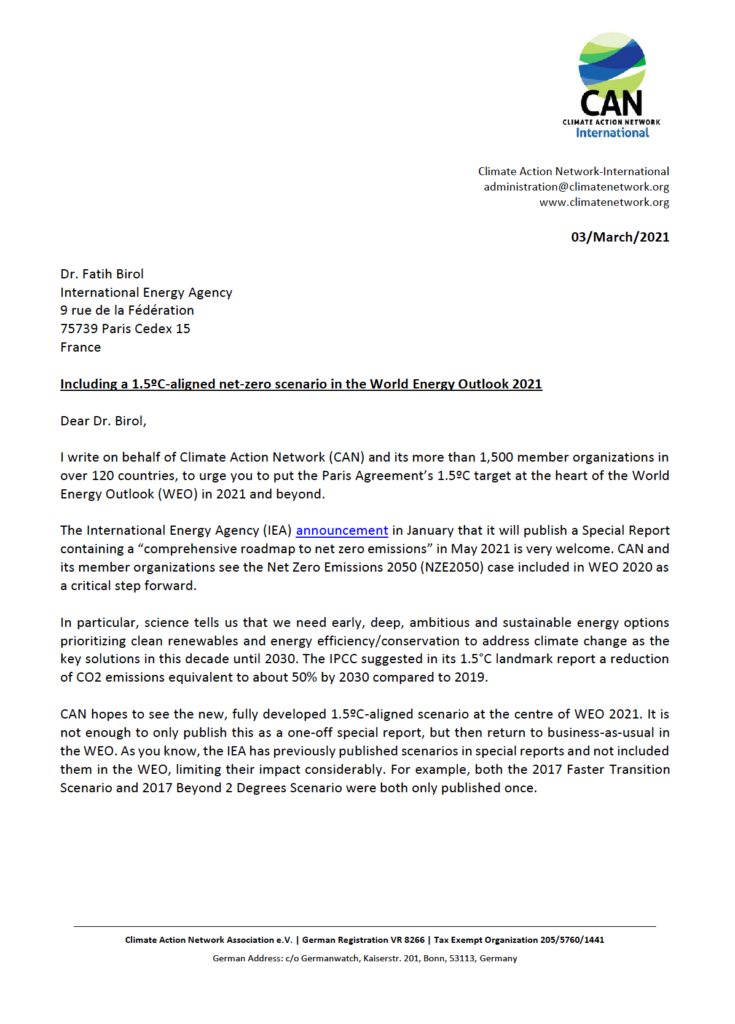 I write on behalf of Climate Action Network (CAN) and its more than 1,500 member organizations in over 120 countries, to urge you to put the Paris Agreement’s 1.5ºC target at the heart of the World Energy Outlook (WEO) in 2021 and beyond.

The International Energy Agency (IEA) announcement in January that it will publish a Special Report containing a “comprehensive roadmap to net zero emissions” in May 2021 is very welcome. CAN and its member organizations see the Net Zero Emissions 2050 (NZE2050) case included in WEO 2020 as a critical step forward.

In particular, science tells us that we need early, deep, ambitious and sustainable energy options prioritizing clean renewables and energy efficiency/conservation to address climate change as the key solutions in this decade until 2030. The IPCC suggested in its 1.5°C landmark report a reduction of CO2 emissions equivalent to about 50% by 2030 compared to 2019.

CAN hopes to see the new, fully developed 1.5ºC-aligned scenario at the centre of WEO 2021. It is not enough to only publish this as a one-off special report, but then return to business-as-usual in the WEO. As you know, the IEA has previously published scenarios in special reports and not included them in the WEO, limiting their impact considerably. For example, both the 2017 Faster Transition Scenario and 2017 Beyond 2 Degrees Scenario were both only published once.

In developing NZE2050 or another 1.5ºC scenario for the Special Report, we urge you to:

1. Stop overstating the role of fossil gas: While the NZE2050 case included in WEO 2020 does project an overall decrease in gas use to 2030 (unlike in the Sustainable Development Scenario (SDS)), this rate of decline falls far short of that included in low and no overshoot scenarios considered by the IPCC in its Special Report on Global Warming of 1.5ºC. NZE2050 projects only a 9 percent drop in gas demand by 2030, whereas the P1 and P2 indicative pathways featured in the IPCC’s Special Report feature more than a 40% drop in gas demand from 2019 to 2030.

2. Stop depending on unrealistic projections for carbon capture and storage (CCS): NZE2050 assumes that CCS projects will capture 1,150 million tons (Mt) of carbon dioxide pollution from fossil fuels in 2030. That is 2.5 times more CCS than is assumed in the IPCC’s P2 pathway (P1 does not rely on CCS), and over 28 times more CCS than the world’s current CCS capacity (40 Mt) – despite the IEA itself projecting that only 10 Mt of new CCS capacity will come online in the power sector by 2025.

3. Stop gambling on negative emissions technologies (NETs): While NZE2050 did not include significant reliance on NETs (because it only included projections to 2030), previous IEA analysis has included high levels of NETs and bioenergy carbon capture and storage (BECCS) beyond 2050. The IPCC calls large-scale reliance on CDR a “major risk in the ability to limit warming to 1.5°C”, because it remains unproven at scale.

4. Stop considering nuclear power as a solution: SDS already projects a growth of nuclear power of 140 GW new additions until 2030 and towards 599 GW totally by 2040 (based on 415 GW today). NZE2050 includes an additional 40 GW nuclear (about 10% of present capacity) by 2030. Research and experience tell us that nuclear power is not only increasingly uneconomic compared to clean renewable alternatives but also has not solved the necessary challenges of identifying long-lasting safe depositories for highly radioactive waste.

To ensure a safe future for all, we need urgent climate action to transform our global energy systems. If the IEA does not include a 1.5ºC-consistent central scenario in WEO 2021, it risks misdirecting trillions of dollars towards new oil and gas development.

You can avoid this by adopting these recommendations as you build out the net zero scenario for the upcoming Special Report – and by including it in future editions of the WEO.

The 1.5ºC temperature target is at the heart of the Paris Agreement, and it is critical that the WEO provide the guidance that governments and investors need to align their energy decisions with this target on an ongoing basis, not just once.