Fossil Day 7: From Russia with love (and smoke!) 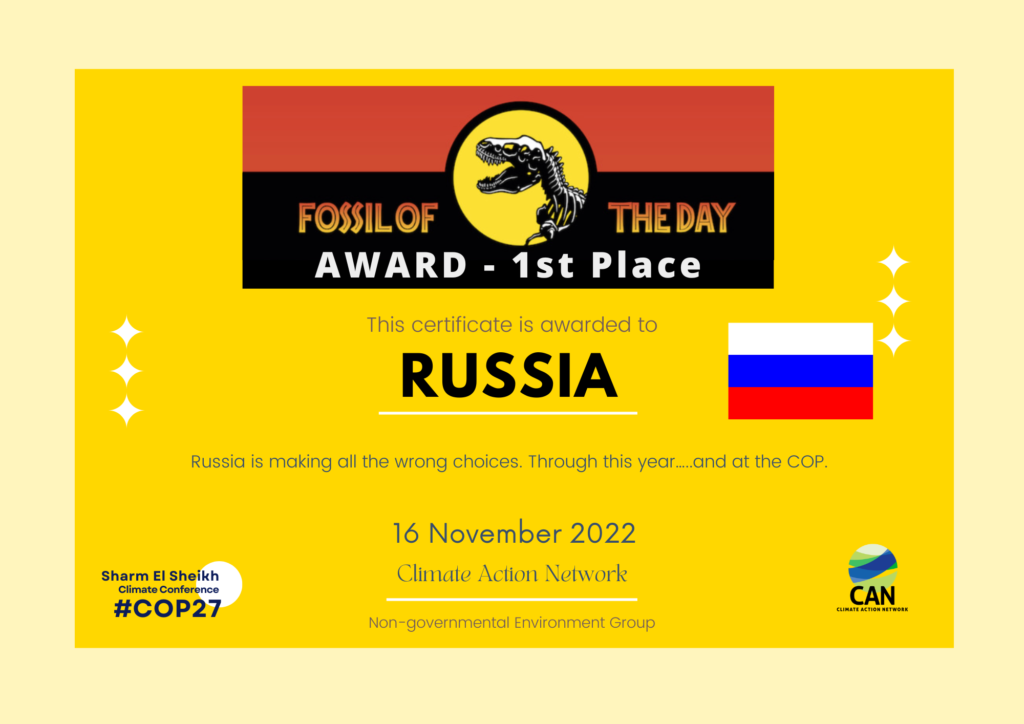 Russia is making all the wrong choices. Throughout this year…..and at the COP.

The Russian delegation used their only public appearance here lobbying for nuclear power and claiming that they produce the safest, cleanest nuclear power plants with zero emissions in energy production. Of course, ignoring the fact that production is not the only thing we are worried about. All those claims on safety and security were made while the Russian Army still occupies the Zaporozhskaya nuclear power plant in Ukraine putting millions of people in grave danger.

Russia is being so criminally self-centered that they decided that energy transition and focus on mitigation is a scam against them and even tried to deny the anthropogenic nature of the climate crisis. Talk about a fossil alert!

Russia, while continuing to produce greenhouse gas emissions and destroying the environment inside and outside of the country, claims that the world can not solve the climate crisis without their involvement. If only they were actually willing to contribute to the solution.

In the 7 months since the start of the war in Ukraine they have caused almost 34 mln tons of emissions. Rebuilding destroyed cities like Mariupol and Izum – which used to be home to thousands of people, will result in around 50 mln additional GHG emission. That’s twice the size of Portugal’s annual emissions.

Waging war, violating human rights, supporting oil, gas, and nuclear and manipulating your forests’ absorbing capacity to pretend your emissions go down is not climate action.,