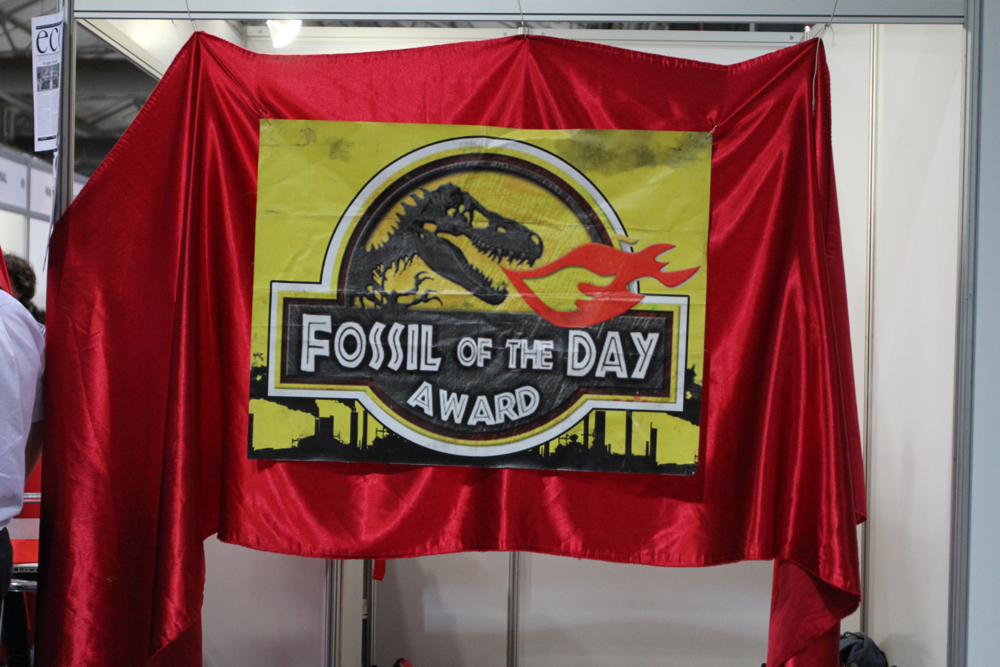 Durban, South Africa – Poland has not won a Fossil of the Day by itself since 2008, when it hosted the
United Nations climate change negotiations in its city of Poznań. All that changed today, when it took First
Place for putting coal ahead of climate. Canada, which has won plenty of Fossils since 2008 (and plenty
since the start of this week), won another, coming in Second Place with another insult by its Environment
Minister to developing countries.

The Fossils as presented read:

"Canada wins the 2nd place Fossil for failing to understand the fundamental principal of common but
differentiated responsibility.

A memo for Canada:

Once upon a time, countries agreed by consensus on a little thing known as ‘Common But Differentiated
Responsibilities' – this became a central pillar in global climate negotiations, recognizing that those who did
the most to cause this problem should act first and fastest to clean up the mess they made.
It seems that Canada’s Environment Minister missed the briefing on this fundamental principle of global
climate talks. The minister has made a series of blunders over recent days, garnering Canada 3 Fossil of the
Day awards so far. This most recent blunder is particularly insulting to the majority of the world who, in
addition to living in poverty, are also dealing with the worst impacts of climate change right now.
Minister Kent rejects the idea of ‘guilt payment’ to poorer countries for emissions. He said, 'there is a fairly
widely held perception in the developing world of the need for guilt payment to be built into any
international deal on climate’ (It’s a view Ottawa does not share).

We suspect this will not be a popular opinion here at an African COP – perhaps Minister Kent should
prepare himself for the political storms that will await him here in Durban."


"Poland wins the 1st place Fossil. Is it a Polish Presidency or a Coal-ish Presidency of the EU at this COP!?
CAN is amazed by recent actions of the Polish EU Presidency which endangers the credibility of the EU at
these negotiations. While EU diplomats are trying to find solutions for the climate crisis in Durban, the
Polish Presidency has decided to support 'the European Coal Days' by using its Presidency logo. Promoting
the dirtiest of fossil fuels at the very same time as the crucial talks in Durban are getting underway seems to
be a joke both for EU diplomacy as well as the global effort to stay below 2 degrees
The Polish Presidency seems to be talking out of both sides of its collective mouth. On one hand, it decides
to support a private interest lobby for the most polluting of all fossil fuels, while on the other, it is talking
big about finding a global solution to climate change.
As one Member of European Parliament in Durban said, 'It’s not helping the EU’s efforts in Durban. The
presidency should be playing an important role but instead, this is absolutely weakening the EU’s position in
Durban, and the Polish presidency is to blame.'
Roughly half of global emissions come from coal! Poland – or is it Coal-land – seems keen to see this
reliance on coal to continue to grow rather than make the urgently needed move to renewable, non-polluting
energy sources.
We urge the Polish Presidency to abandon coal and, in support of the rest of the EU working hard in Durban,
embrace a clean, green 100% renewable energy future."

We have a special update on a Fossil Award from earlier this week!  It seems we’ve gotten some attention!

As you may recall, CAN Awarded a Fossil of the Day to Poland on Wednesday for their apparent association with the “European Coal Days”.

Well, the Polish government has responded!!!!

December 1, CAN received a letter from them explaining the situation further (image below).

In the letter, they explain that their logo was used without their government’s permission, and that they have asked the conference organizers to make it clear that Poland is not associated with the event.

We must say that we are relieved that the Polish Presidency decided to distance itself from this coal lobby event. What’s more, we look forward to working with Poland to ensure that they become climate leaders by quitting their coal investment plan and embracing a greener energy future.

We also want to remind them — and all parties — that we hope we might have the opportunity to award a Ray of the Day sometime soon should they show true leadership at these talks.

As always, we’ll be watching carefully!