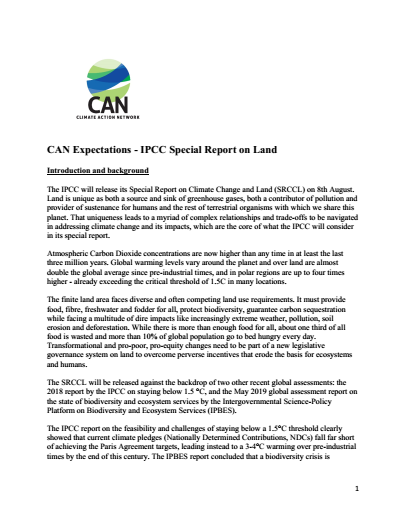 The IPCC will release its Special Report on Climate Change and Land (SRCCL) on 8th August. Land is unique as both a source and sink of greenhouse gases, both a contributor of pollution and provider of sustenance for humans and the rest of terrestrial organisms with which we share this planet. That uniqueness leads to a myriad of complex relationships and trade-offs to be navigated in addressing climate change and its impacts, which are the core of what the IPCC will consider in its special report.

Atmospheric Carbon Dioxide concentrations are now higher than any time in at least the last three million years. Global warming levels vary around the planet and over land are almost double the global average since pre-industrial times, and in polar regions are up to four times higher – already exceeding the critical threshold of 1.5C in many locations.

The finite land area faces diverse and often competing land use requirements. It must provide food, fibre, freshwater and fodder for all, protect biodiversity, guarantee carbon sequestration while facing a multitude of dire impacts like increasingly extreme weather, pollution, soil erosion and deforestation. While there is more than enough food for all, about one third of all food is wasted and more than 10% of global population go to bed hungry every day. Transformational and pro-poor, pro-equity changes need to be part of a new legislative governance system on land to overcome perverse incentives that erode the basis for ecosystems and humans.

The SRCCL will be released against the backdrop of two other recent global assessments: the 2018 report by the IPCC on staying below 1.5 °C, and the May 2019 global assessment report on the state of biodiversity and ecosystem services by the Intergovernmental Science-Policy Platform on Biodiversity and Ecosystem Services (IPBES).

The IPCC report on the feasibility and challenges of staying below a 1.5°C threshold clearly showed that current climate pledges (Nationally Determined Contributions, NDCs) fall far short of achieving the Paris Agreement targets, leading instead to a 3-4°C warming over pre-industrial times by the end of this century. The IPBES report concluded that a biodiversity crisis is resulting in the collapse of natural and agricultural ecosystems, posing a threat to life on Earth as serious as the climate crisis.

The release of the SRCCL coincides with the period in which governments are expected to enhance their pledges for climate action under the Paris Agreement. CAN is urging all governments, particularly of richer, higher emitting economies, to strongly update and strengthen their climate pledges (NDCs) by 2020 at the latest, in line with a need to reduce carbon pollution by 50% by 2030 compared to today as suggested by the IPCC in its 1.5 C report. In particular, governments must use the important findings of the IPCC SRCCL to design and incorporate actions on resilience building, adaptation and mitigation in the land sector as they enhance their NDCs over the coming months. Actions by governments on carbon pollution in the land sector shall not be traded off with deep carbon emission reductions in industrial and energy sectors. To have a chance to avert climate chaos, we need all actions to be ambitious, transformational and simultaneous.

CAN’s expectations for the land report fall under four themes:

1. The IPCC should recognize the enormous mitigation and adaptation potential of terrestrial ecosystems if maintained and enhanced

The climate and biodiversity crises are interlinked, with important implications for effective climate action. There is significant climate risk if we fail to protect and restore the biodiverse natural ecosystems – forests, wetlands, grasslands – across the planet, which contribute to climate stability and resilience while also serving as huge stores of carbon. Mitigation solutions that also address the biodiversity crisis should be prioritised over other approaches.

The IPCC should create a clear strategic hierarchy for climate action in land and forests. Carbon rich primary ecosystems (forests, peatlands, wetlands, mangroves, savannas) are irreplaceable. The report should make clear that governments should immediately prioritise their protection, improved management, buffering and reconnection so as to maximise ecosystem integrity, stability and resilience. As an overriding priority, CAN urges a cessation of all deforestation in primary forests within the next few years and well before 2030 together with the protection of all primary ecosystems by governments to be part of their enhanced NDC for 2030.

2. There will be significant impacts on food security and global ecosystems if there is large-scale use of land for mitigation using bioenergy, bioenergy carbon capture and storage (BECCS), and large-scale afforestation

Many climate models assume a scale of land use for mitigation (negative emissions ) that far exceeds what is possible or reasonable. The large-scale use of land for mitigation purposes alone would have myriad unacceptable consequences, threatening food production, biodiversity, and water supplies. Mitigation through protecting and restoring forests and other carbon-rich ecosystems far outperforms forest monocultures, which should be clearly outlined in the final report. CAN urges the IPCC and governments to focus primarily on ecological, nature-based solutions to complement the deep decarbonisation needed in other sectors across the economy.

Land use systems including agriculture and food production are responsible for over 20% of greenhouse gas emissions. Chief contributors are emissions from deforestation, forest degradation and drainage of peatlands alongside meat production and from the use of synthetic nitrogen fertilizers. Reducing industrial produced beef and dairy in diets and shifting towards agroecological production methods that reduce or eliminate the use of synthetic fertilizers could on their own substantially reduce emissions from agricultural production. Industrial and high-input production systems tend to have far greater land use and climate impacts than small-scale food producers or pastoralists who rely on less intensive and more ecological production methods.

Climate change will have serious consequences for the poorest and most food insecure communities, affecting all four pillars of food security: availability, access, utilisation, and stability. Support for adaptation, particularly for small-scale food producers and pastoralists, must be a priority of governments. Limits to adaptation will be reached in many regions as warming continues, leading to loss of agricultural livelihoods, widespread food insecurity, and migration of affected people, underscoring the critical need to keep warming below 1.5°C.

4. Land rights, tenure, a central role for local communities, and gender equity are all foundational elements for actions to be taken in the land sector

The IPCC report should lay out a compelling case for governments to invest in and legislate secure land rights for indigenous peoples, small-scale farmers, peasants and their families both as a cost-effective climate mitigation strategy and as a means to advance broader development and achieve the sustainable development goals (SDGs).

CAN is convinced that this will all contribute to better governance of land, significantly reduce land-based GHG emissions while generating long-term carbon sinks, protect biodiversity, establish much more sustainable food security, strongly increase resilience building and adaptation to climate extremes and enhance social and land justice particularly for the rural and poor population.