To see the absolute numbers of achieved co-benefits per country, please go to the NewClimate Institute website and check out the full reports behind this ranking. 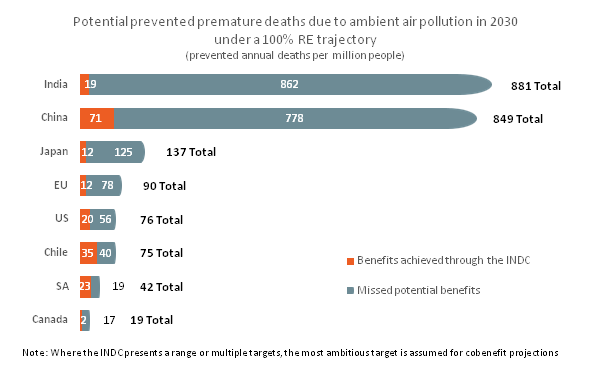 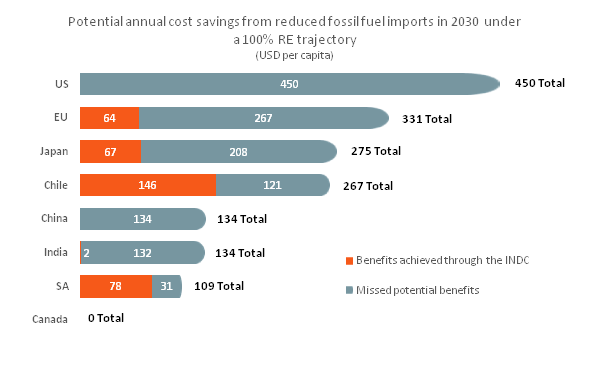 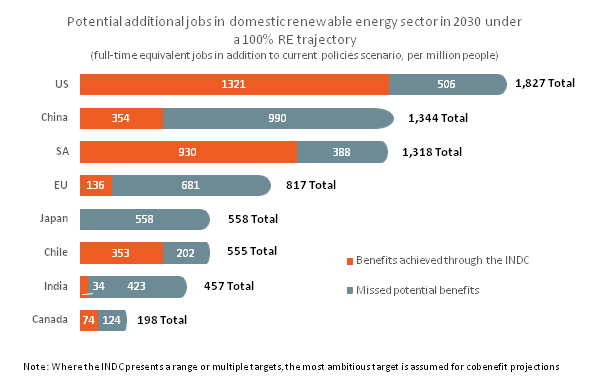 A note on methodology: Countries assessed were: the EU, China, the US, Chile, South Africa, Canada, India and Japan. The co-benefits ranking is based upon the calculation methodologies detailed in NewClimate Institute (2015). These methodologies assess the benefits that would be achieved by the countries’ INDCs in 2030 compared to a current policies scenario, as well as the additional “missed” benefits that would be possible if the countries were to embark on a trajectory for 100% renewable energy by 2050, thus in line with keeping global warming below 2°C and possibly even 1.5°C. The benefits were assessed with regards to three major indicators: cost savings from fossil fuel imports including coal for the power sector, oil for the transport sector and natural gas for all sectors; prevention of premature deaths from air pollution, including all-cause premature mortality associated with concentrations of ambient PM2.5 concentrations; and, job creation through domestic renewable electricity installations, including jobs for manufacturing, construction, operation and maintenance for solar, wind, hydro, geothermal and biomass electricity installations. In these charts, the results are presented on a per capita basis in order to compare the respective impacts of each potential benefit across the countries, relative to their population sizes. Per capita calculations are based upon the projected populations in each country in 2030, according to the World Bank Health Nutrition and Population Statistics. In the case that countries’ INDCs included a target range, or multiple targets for emission reductions, the outcomes for the most ambitious targets are presented in this analysis to positively demonstrate the potential benefits that such a level of ambition could accrue.

For more information or for an interview with a spokesperson, please contact: