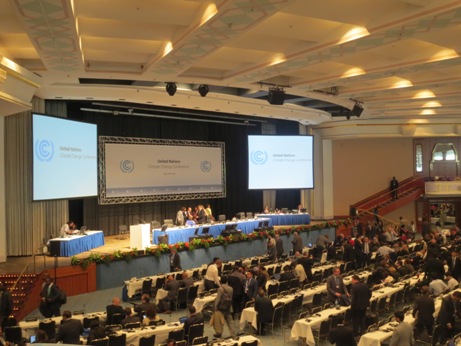 Attending SBI 38 session in Bonn Germany for about 2 weeks is not something that can be enjoyable when you have to sacrifice so many things back home. Travel one-way take around 18 hours consisting of flights, trains and ‘enjoying’ the traffic towards the airport back home. It would be nice to have something in return, a good and worthwhile return, such as progress in the climate change negotiations.

After the closing of Ad hoc Working Group on Long-term Cooperative Actions (AWG-LCA) and Ad-hoc Working Group on Kyoto Protocol in Doha at the end of 2012, now SBI (Subsidiary Body for Implementation) and SBSTA (Subsidiary Body for Science and Technological Advice) do play the important roles to enhance all actions within the climate change negotiations. All things now should be followed up by the two sessions. SBI, for instance, should take forward the issues of the Nationally Appropriate Mitigation Actions (NAMAs), Loss and Damage, as well as National Adaptation Plans (NAPs), and other important agenda items. The above issues are crucially important for developing countries to move forward. We need the assurance that we can move forward to implement the above agendas at the national level. Having SBI stuck with the procedurals agenda, due to Russia leading the blocking of adopting the meeting’s agenda, leaves us to wonder, what will take place in Warsaw?

I guess the experience of having heat waves in 2010, in Russia, doesn’t really bother them. Even the flood in Magdeburg, last Saturday, a city in eastern part of Germany that has relocated over 3000 people, didn’t really touch their hearts. But does it? Or maybe the desire to have more power back home exceeds the suffering of the innocent people who do not understand what these “politics” really mean.

I don’t really know what will happen in Warsaw, but I still believe that we can move forward. Like a song that says about keeping a relationship alive, I hope that we could all  sing the same tune and keep that in our minds what needs to happen each day for a 2015 global climate deal. We shouldn’t give up on the negotiations, even the negotiations get rough because God knows that it’s worth it, so we shouldn’t be the people who walk away so easily.