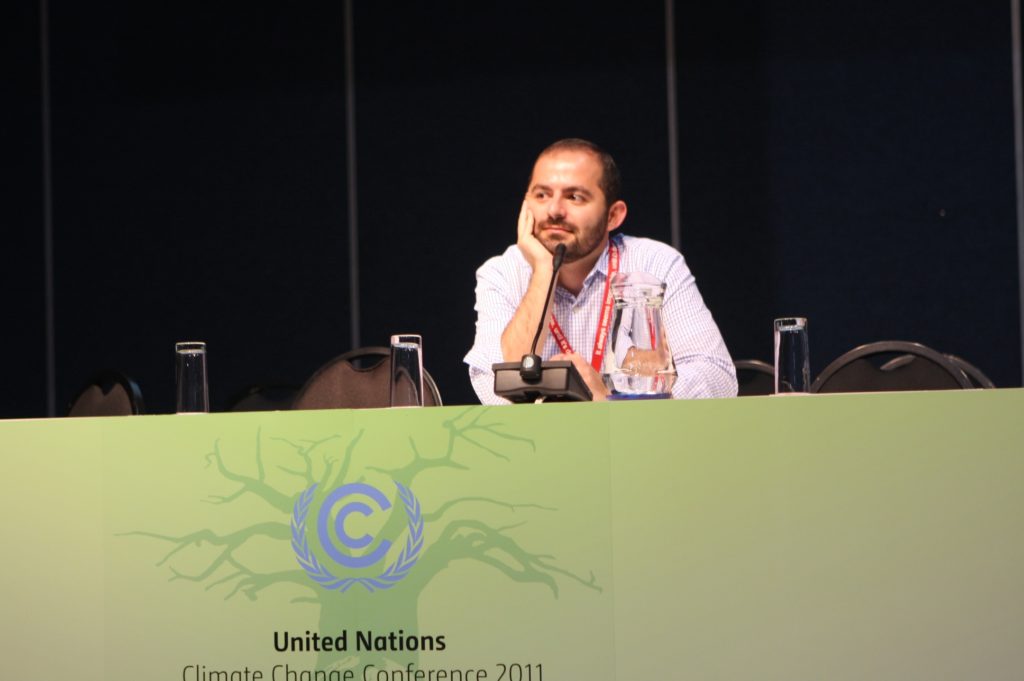 Dear friends,
As you may recall, today marks my last day as Director of the CAN-International Secretariat.

I said a lot in my announcement to CAN members at the end of last year about how much I've learned and grown in this position. If I could somehow express those sentiments even more strongly now I would, having continued to learn so much from so many of you in the last few months of my post here. I'll be carrying with me wonderful memories from Durban, of touching moments reminiscing with friends, of whispering in our outdoor meeting so a certain bug-eyed climate denier couldn't hear us, of dancing on the beach, hugs and handshakes, smiles and frustrations.

There are, as could be expected, things I will not miss from the past few years — those 6am conference calls, the countless hours spent in airplane lounges or trying to find that one elusive comfortable posture on cramped airplanes. I won't necessarily miss arguing with the UNFCCC for more intervention slots or negotiating where a comma should go to avoid a dreaded "byline" on CAN positions. But, by a large margin, there are many more memories, lessons, and experiences that this position has afforded me that I will cherish.

When I'm asked what I've enjoyed about my job I almost universally tell the same story — how it all boils down to the people I've been privileged to get to know, to work with, and to call my friends. We at the Secretariat often say CAN is only as strong as its members. If that hypothesis holds, I can safely say — having gotten to know so many of you so well — that CAN is an incredibly strong coalition. It's a crazy moment to be sitting in the back of a plenary of a UN negotiation at 4am in a foreign country and look around the room and feel like you are surrounded by family. It's those moments walking down the halls of the Maritim where you feel like you will never make it to your destination because you feel compelled to stop every four feet to talk to someone you bump into. The idea that I literally can go to any continent on the globe and find someone that is part of this family is something that I don't think I'll ever wrap my head around. It's something I'll always hold dear, perhaps even more so than our successes along the way.

And for these experiences, the friendships, and all the lessons I have taken from so many of you, all I can say is thank you.

One of the things I've been struck by is how personally invested CAN members are in this work. This isn't a job to many of us; it's not a 9 to 5 thing that we can set aside from our "normal" lives. For better or worse, it's our life's work and it's something we are all truly passionate about.

With that in mind, it becomes clear that our enemies are not eachother (despite the fact that sometimes it might feel that way), or the more radical or conservative colleagues we find in the network. Our enemies are out there. They are the fossil fuel interests who are making more money than ever known to man, and spending equal amounts on making sure they can continue to make that money. They are the conservative politicians who have either been bought off by those corporations or somehow otherwise genuinely fear government policies and regulations, when we know that for a truly global problem, a comprehensive government approach is needed. There are those who choose to turn the other way — perhaps aware that the problem exists, but not willing to admit it because doing so would make their lives inconvenient.

Our enemies are not eachother and they never will be…and that's what makes CAN so important. We need our fellow CAN members not just for support, but because it's only together that we can win. This is why I'm so happy to know that I am leaving CAN in as strong a position as I could ever have hoped to leave it. We have an amazing Secretariat that works tirelessly with the full understanding that their efforts will often be left out of the limelight, but knowing how important they are all the same. We have more members from more countries and constituencies than could have been dreamed of 20 years ago, and our positions, analyses, and strategies reflect this in the most positive of ways. We have the respect and attention of governments all around the world, even if sometimes it feels as though they choose to ignore us.

A friend of mine in the movement once wrote that she knows we're going to win because we're cooler than they are. And I couldn't put it better myself. Putting aside the fact that we're have the truth on our side…we're more fun, more dynamic, more challenging, more passionate, more inspiring, more critical, more friendly, more caring, more creative than THEY are. And sometimes we throw some wicked parties too.

I know you all aren't going anywhere from my life and my heart–and this cause–and you can rest assured I'm not going far. This is a fight we're in together, no matter what roles we play. And I know, like you, I plan on seeing it to the end.

As I leave this role, I'm so tempted to use that clichéd phrase, "it's not goodbye, it's see you later." But I won't…instead, I'll just say: