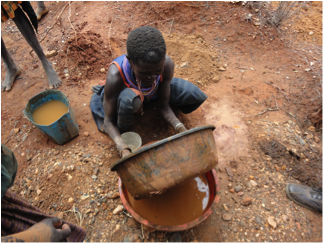 Negotiations are not all about competition, but the survival of humanity.

As a CAN Southern Capacity Building Program (SCBP) Fellow, I have been following the climate change negotiations in Bonn, Germany learning some amazing lessons and discovering frustrations in the process.

It all started with a clear message that the fastest-ever rise in greenhouse gas emissions is an "inconvenient truth” that the world must face, the UN's climate change chief Christiana Figueres, said. But she added that the data should not lead to fatalism that the problem is impossible to tackle.  She acknowledged that Countries have run out of time to launch a new binding deal by 2013, implying a messy, legal gap. But she also issued a strong call to governments; "I won't hear that this is impossible; governments must make it possible for society, business and science to get this job done."

Ministers agreed last year in Cancun, Mexico to limit a rise in average global temperatures to below 2 degrees Celsius (3.6 F) above pre-industrial times, seen as the threshold for “dangerous” change such as heat waves, droughts, floods and rising seas.  However, the debate over the meeting agenda in Bonn made some countries doubt the value of extra meetings before Durban. “Without progress in these two weeks there’s no point in having another session in the fall,” the Colombian delegation said during the launch of the Bonn session.

Developed countries have yet to decide whether to fund additional sessions before an annual ministerial conference in Durban, South Africa in November.  “This will depend among other things on the extent of progress made here in Bonn, and whether the political will among parties exists for a further session,” said the head of the EU delegation, Artur Runge-Metzger. “We are well aware of the fact that deliberations in Durban will be difficult,” South African delegate, Nozipho Diseko, told the Bonn conference participants.

Talks can only proceed by consensus, not confrontation and suspicion as expressed by some delegates. “I’m a little sad participating in these negotiations because the atmosphere is so confrontational,” said Akira Yamada, head of the Japanese delegation. “We’re not prepared to move if the obligations just point only to those in the developed world,” said Jonathan Pershing, the U.S. head of delegation in Bonn.

As Ambassador Jorge Arguello of Argentina said, "we must stop making excuses and sit down at the negotiation table to decide strong terms for a second commitment period of the Kyoto Protocol. Some countries are hiding behind fragmented information and cherry-picking numbers to claim that a second commitment period is not possible and blame developing countries. That simply is not true."

I smell a rat that could poison our hope and expectation for a fair, ambitious and legally binding climate change agreement this year in Durban, South Africa. Parties need to focus on substance as opposed to raising just issues, on transparency and accountability for their actions, on embracing open discussions, and on the participation of civil society. It is also vital that the voices of the vulnerable, marginalized and powerless are heard, respected and considered during the whole negotiation process.   It is also my belief that every aspect of the negotiation should be handled in the spirit of partnership, cooperation and development, and not malice, jealousy and sabotage. Failure to walk the talk, to appreciate our last chance, to sacrifice our privileges and defend human civilization, the results are catastrophic in nature and thus – “the jigger in the flesh”. Let us act now on climate change!!

A Jigger is a parasitic flea found in tropical climates that can cause an inflammatory skin disease.