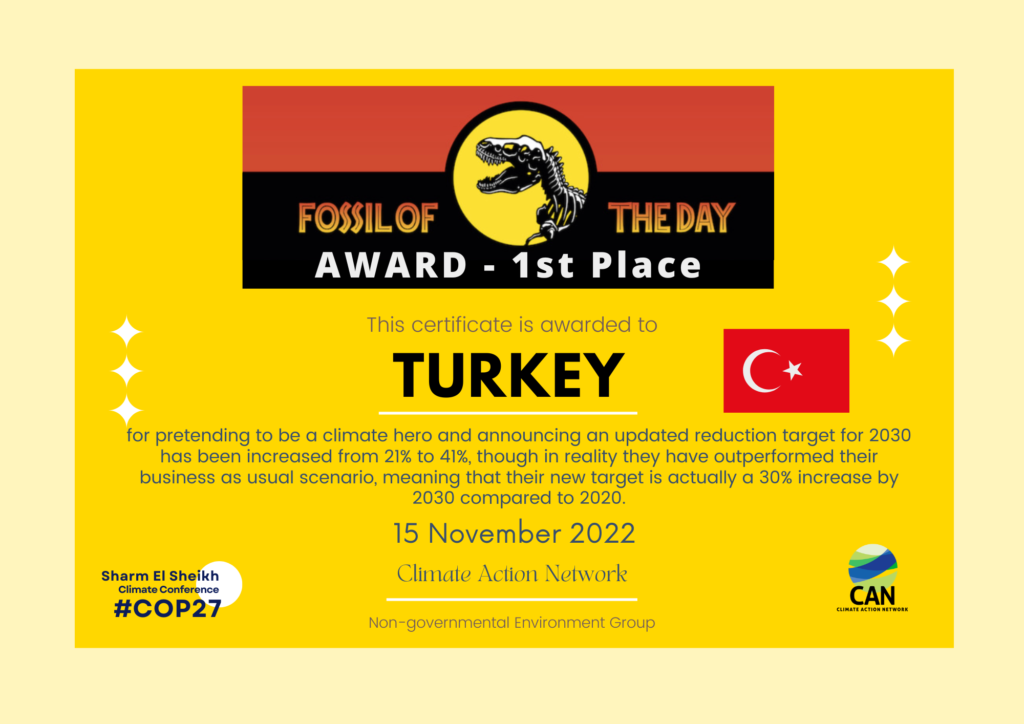 So, how do you take good news and turn it into a fossil of the day? Turkey managed to accomplish this today when their Minister for the Environment, Urbanization, and Climate change, Murat Kurum, announced their updated Statement of Contribution. The updated 2030 target has been increased from 21% to 41%, sounds good right? But Turkey has actually outperformed their business as usual (BAU) scenario(also good!), which their targets are based on, meaning that their new target is actually a 30% increase by 2030 compared to actual 2020 emissions.

This isn’t the first time countries have played with baselines or other creative number games to allow themselves to keep fueling climate change while looking good on paper. We’ve pretty much seen it all and won’t be fooled by this latest attempt to put lipstick on a pig.

When Turkey ratified the Paris Agreement in 2021, President Erdoğan also announced a net-zero target date for Turkey of 2053. Unfortunately, the new targets aren’t in line with a pathway to reach this. However, according to calculations by climate civil society organisations and think tanks, Turkey’s emissions could be reduced to 35% in absolute terms by 2030 compared to 2020 levels thus achieving the 2053 net zero target in a planned and less costly way.

During his announcement, Minister Kurum said that Turkey wants to be a leader in climate and environmental policies. Being honest about your numbers would certainly be a first step towards that goal. There is a pathway towards true climate leadership. Turkey needs to decide if it will embrace it, and in doing so also tackle the high bills, worsening air, water and soil pollution, and increasing health problems caused by a dependence on fossil fuels, or if it will be happy playing with numbers.