Presenting the worst of the worst: USA goes home as Colossal Fossil 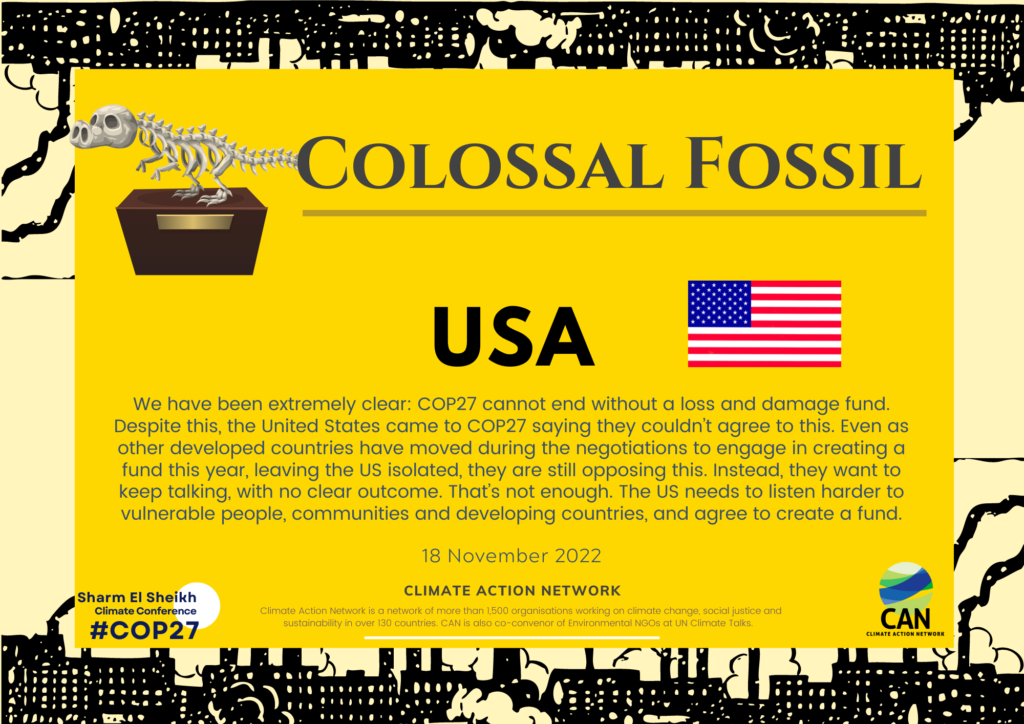 And the Colossal Fossil goes to… The United States!

Civil society and developing countries have been extremely clear: COP27 cannot end without a loss and damage fund. We were clear when leaving Glasgow and clear throughout this entire disaster-filled year. Despite this, the United States came to COP27 saying they couldn’t agree to this. Even as other developed countries have moved during the negotiations to engage in creating a fund this year, leaving the US isolated, they are still opposing this. Instead, they want to keep talking, with no clear outcome. That’s not enough. The US needs to listen harder to vulnerable people, communities and developing countries, and agree to create a fund.

Let’s not forget that during the first week the US Envoy for Climate Change, John Kerry, announced the “Energy Transition Accelerator”, their inadequate plan to streamline carbon offsets in partnership with corporate philanthropic groups such as Bezos’ Earth Fund and the Rockefeller Fund. The expansion of carbon markets and the marriage of corporations and government is the epitome of a neoliberal agenda that does absolutely zero to reduce actual emissions globally.

There is no going back, the US needs to understand that we’ve waited long enough for a loss and damage fund. This is the year for its creation.

A dishonourable mention also goes to Russia and Bolsonaro’s Brazil

Hey, Russia! You might have been keeping a suspiciously low profile at COP 27 but don’t think we didn’t see the 30 fossil fuel lobbyists you brought in your delegation. Russia has used COP to promote its nuclear power as a climate solution while being responsible for an additional 33 mln tons of CO2 caused by the war. At the same time, Russia was saying that energy should not be part of the decision since these negotiations are about climate change and not energy. Does Russia think energy just comes out of thin air?

On the other side of the world, Brazil also merits a dishonorable mention. Another country that was uncharacteristically mute in these COP27 negotiations yet has spent the past four years trying to blow apart the Paris Agreement while violating human and environmental rights. The anti-environmental policies of the outgoing Bolsonaro government have made Brazil increase its emissions for four years in a row, a growth that is unprecedented since measurement began in 1990. This is mostly due to the deforestation in the Amazon, which is out of control and increased by 73% under the current administration. While the winds might be changing in Brazil, we can’t overlook the damage done. Goodbye and good riddance to Bolsonaro and his climate disaster.

About CAN: The Climate Action Network (CAN) is a worldwide network of over 1900 Non-Governmental Organizations (NGOs) in more than 120 working to promote government and individual action to limit human-induced climate change to ecologically sustainable levels. www.climatenetwork.org