Overview briefing on the IPCC Special Report on Global Warming of 1.5°C 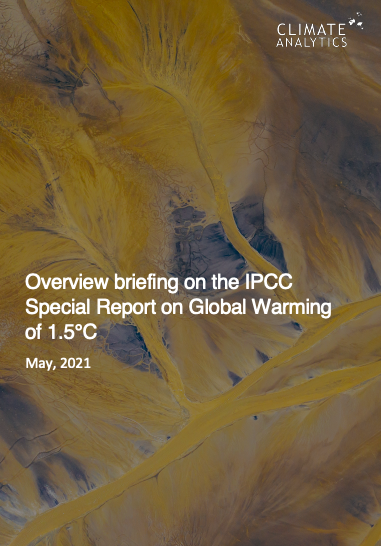 The impacts of about 1°C of warming are felt globally today.

This IPCC Special report on the impacts of global warming of 1.5°C assesses projected impacts at a global average warming of 1.5°C and higher levels of warming. We are already seeing the consequences of 1°C of global warming through more extreme weather, rising sea levels and diminishing Arctic sea ice, among other changes. It also assesses the evidence of emerging climate impacts at 1°C and illustrates how warming of 0.5°C over the historical warming period has already led to substantial increases in climate extremes.

Limiting warming to 1.5°C avoids the worst impacts of climate
The report highlights a number of climate change impacts that could be avoided by limiting global warming to 1.5°C compared to 2°C: by 2100, global sea level rise would be 10cm lower; the likelihood of an Arctic ocean free of sea ice in summer would be once per century, compared to at least one per decade; coral reefs would decline by 70-90%, whereas virtually all would be lost under 2°C. The number of people both exposed to climate-related risks and susceptible to poverty would be substantially lower under 1.5°C.

Limiting warming to 1.5°C is possible
The report is clear that limiting warming is still possible even when accounting for uncertainties and feedbacks in the climate system such as the carbon cycle and aerosol forcing. With stringent emission reductions in the very near-term, it is still possible to limit warming to below 1.5°C. Under current warming trends, 1.5°C would be reached between 2030 and 2050.

Emission reductions until 2030 are decisive to achieve 1.5°C
The report is clear that if the current round of ÞNDCs until 2030 are maintained, the 1.5°C limit will be out of reach. Near-term emission reductions are crucial to limit warming to 1.5°C. In order to set the world on track for 1.5°C, the total greenhouse gas emissions in 2030 need to be about 50% lower than what is implied by current policies.

Stringent climate action comes with multiple benefits for sustainable development
Urgent, ambitious, unprecedented mitigation and adaptation action is needed across all countries, communities, and sectors, to limit global warming to 1.5°C while achieving sustainable development and poverty eradication. Limiting warming to 1.5°C will avoid critical climate change impacts on sustainable development, eradication of poverty and reducing inequalities compared to 2°C. Stringent mitigation consistent with 1.5°C pathways are associated with more synergies than possible trade- offs across the Sustainable Development Goals (SDGs). Pathways that take a holistic approach to sustainability and are characterized by low energy demand, low material consumption, and low GHG-intensive food consumption have the most pronounced synergies and limit any possible trade-offs.