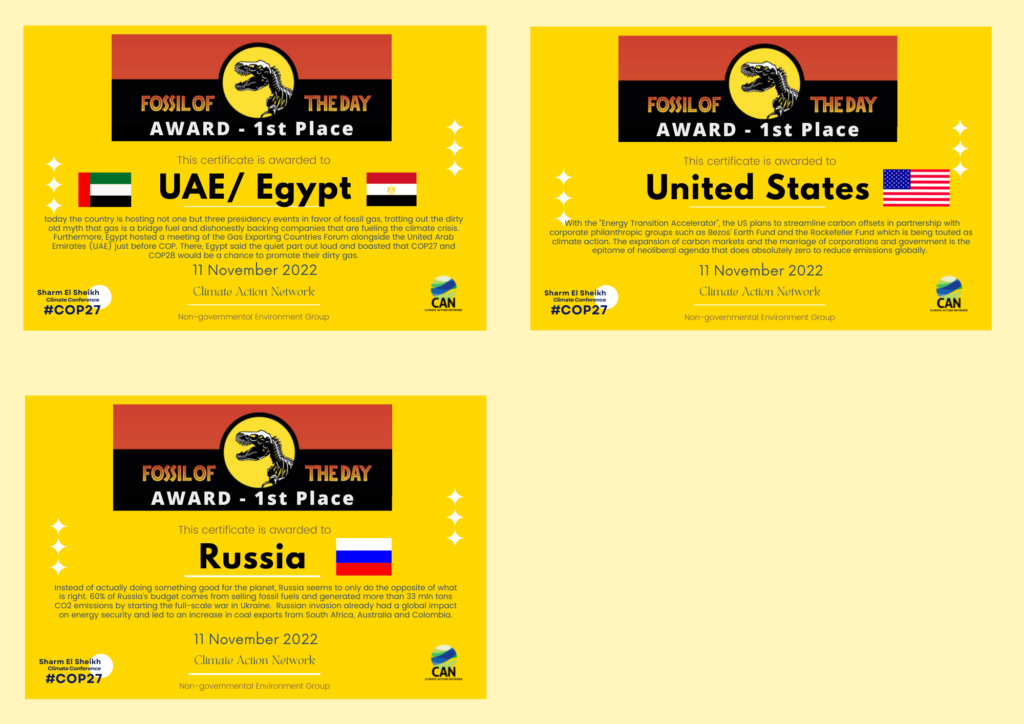 US, Russia, Egypt and UAE refuse to decarbonise- fossils run in their veins

Today is Decarbonization Day, which is why there are four winners of our Fossil Award today.

The United States wins the  Fossil of the Day Award, coinciding with President Biden’s visit to COP27. The US Envoy for Climate Change, John Kerry, announced on Wednesday the “Energy Transition Accelerator”, the US’ inadequate plan to streamline carbon offsets in partnership with corporate philanthropic groups such as Bezos’ Earth Fund and the Rockefeller Fund which is being touted as climate action. The expansion of carbon markets and the marriage of corporations and government is the epitome of a neoliberal agenda that does absolutely zero to reduce actual emissions globally. Enough with the fluff and grand speeches, when it comes to putting real money on the table the US disappears from the scene.

Russia will also receive a Fossil of the Day Award for using dirty fossil fuel money to fund its illegal war in Ukraine. In COP27 the Russian delegation has 33 fossil full lobbyists from oil and gas out of 150. 60% of Russia’s budget comes from selling fossil fuels. Russia has already generated more than 33 mln tons CO2 emissions through this full-scale war in Ukraine. And it continues its attacks on Ukraine’s energy infrastructure, which is definitely not the way one should be phasing out fossil fuels. Russia’s invasion has already had a global impact on energy security and led to an increase in coal exports from South Africa, Australia and Colombia. Fossil fuels drive conflict, wars and are the antithesis of peace and stability.

Egypt wins another Fossil of the Day Award – two days in a row but this time it’s a joint award with the United Arab Emirates (UAE)! Today, the COP27 presidency is hosting not one but three presidential events in favor of fossil gas, trotting out the dirty old myth that gas is a bridge fuel and dishonestly backing companies that are fueling the climate crisis. The Egyptian Energy Minister described fossil gas as “the least emissions fuel” for the transition period, which is ironic considering they are basically just talking about digging up methane which was already safely trapped below ground before they got involved.

What’s more, throughout COP27, the UAE has used its pavilion to promote its gas industry. It’s like the anticipated COP28 presidency thinks they’re at a fossil fuel producers’ conference, not the climate negotiations. The Guardian reports, Egypt hosted a meeting of the Gas Exporting Countries Forum alongside the UAE just before COP. There, Egypt said the quiet part out loud and boasted that COP27 and COP28 would be a chance to promote their dirty gas. If they want to be taken seriously as the incoming COP presidency, the UAE needs to get real about the energy transition instead of leading us down a bridge to nowhere. This is why we are giving this third award to Egypt and UAE together!