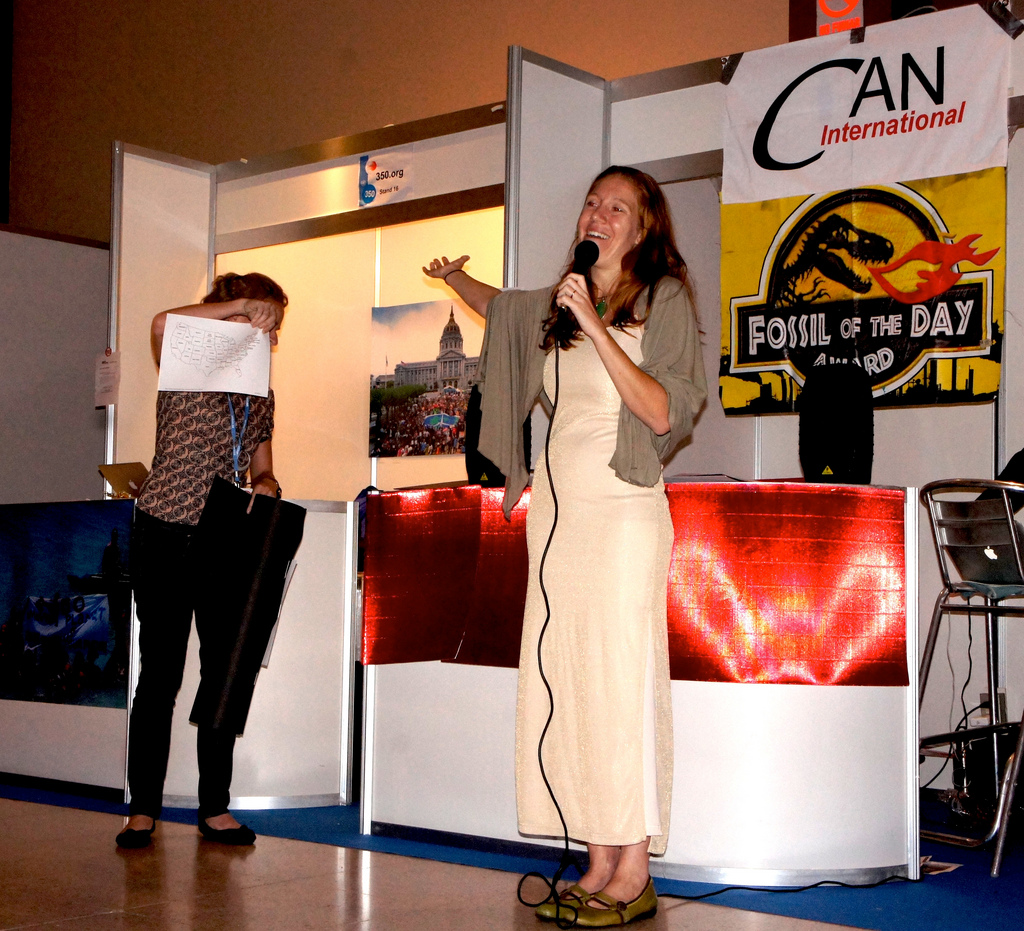 First place Fossil is awarded to the USA. There are three excellent reasons to award today's first prize Fossil to the United States:

First, recent news has surfaced that the US State Department has a bias towards carbon polluting pipelines–namely, the Keystone XL, which is a 1,700-mile fuse to the largest Carbon bomb on the planet, the Alberta tar sands. The State Department is currently conducting a review for the pipeline, but has been receiving significant counsel from the pipeline company's own lobbyists.

Exploiting the tar sands is a dangerous step in the wrong direction, and one that President Obama will decide upon before the year is out. This troubling relationship obscures the fact that saying no to Keystone XL is a positive step for the US to demonstrate seriousness in face of the climate crisis.

Given this bias, it's no wonder there is further cause to award the US a Fossil. In today’s LCA discussion on legal form, the U.S. expressed its unwillingness to reach agreement on a mandate.  To sum up, the US doesn't think the likely outcome would suit them, so they would rather not bother continuing the discussion. The US expressed that a strong mandate is in fact in the US interest, but expending the energy to reach it appears not to be.

Finally, yesterday's finance informal resulted in the US stating that no discussion of sources of finance should continue, but rather, proceed into the g20 as a venue. The US is only interested in discussing the standing committee–which is only one of four important areas of focus to ensure adequate financing. Innovative sources of financing are crucial and should be taken up here.

For these three reasons, we award the United States a first-prize Fossil.

Saudi Arabia gets the 2nd place Fossil of the Day for attempting to block the Chair of the Legal Options Informal Group from outlining the options on legal form.  Hmmm – let's go over that one, one more time – the Saudis do not want the Chair, who has been mandated by Parties to convene a group to talk about legal options, to talk about legal options??  Come on!  A mandate is a mandate and progress in this group on legal form is crucial to a successful outcome in Durban.  Luckily, the Chair is well aware of her mandate and will proceed with the discussions on options tomorrow.  Good on her!  A legally binding agreement is the highest form of commitment and with an issue as serious and as pressing as climate change, the highest form of commitment is sorely needed from all countries.  The first step to getting there and bridging the divide is to have a clear overview of the options currently on the table in terms of legal form and where countries stand on them.  We are looking forward to the continued discussions tomorrow, but without any further procedural shenanigans!