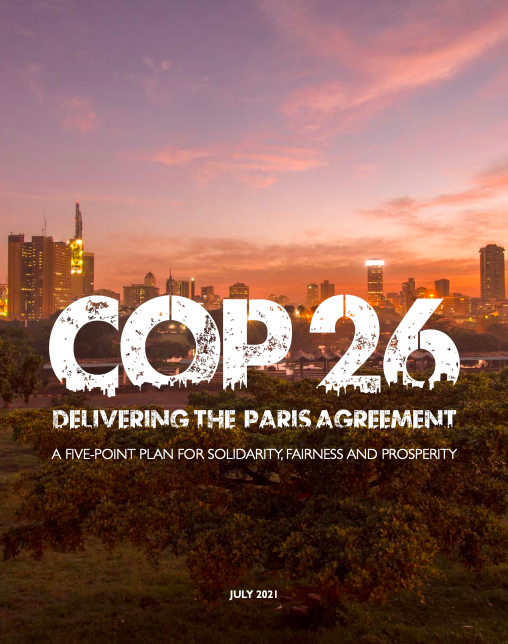 The report COP26 Five-Point Plan for Solidarity, Fairness and Prosperity is developed by CAN members and other organisations and developing country leaders originally posted here.

Developing countries lay out demands ahead of COP26 climate talks

Representatives from developing countries have fired the starting gun on negotiations ahead of this year’s COP26 climate summit taking place in Glasgow in November.

The new position paper lays out a five point plan for concluding a successful COP26 summit and highlights the key issues which need to be delivered in order to tackle the climate crisis.

It comes in response to a failure to make the needed progress on tackling the climate crisis from last month’s G7 and the G20 finance ministers meeting which concluded on Sunday.

The COP26 talks will address key issues regarding the Paris Agreement such as the promised financial support from rich, polluting nations to poorer, vulnerable countries, as well emissions reductions and new net zero targets.

Many developing countries are keen to cut their own emissions, despite being responsible for only a tiny amount of the climate heating fossil fuel burning which historically made the developed world rich but created the climate crisis the world faces today.

However, they need funding to help them transition to renewables and adapt to the changes which are afflicting their people.

The five points laid out in the paper are:

·         Cutting emissions: Despite welcoming recent progress, the sum total of climate policies in place across the world will not keep global warming within the limits that governments agreed in Paris. An acceleration of net-zero targets are urgently needed, led by those with the biggest responsibility and capacity.

·         Finance: The promises made by developed countries in Copenhagen in 2009 and again in the Paris Agreement are unequivocal, and must be delivered. At least $100bn per year was promised by 2020 with increased annual sums from 2025. However, this target has been missed and needs fixing urgently if developed countries can trust richer nations at COP26 to keep to what they negotiate.

·         Adaptation: With climate impacts increasing, a specific goal of at least 50% of climate finance needs to be committed to help the most vulnerable adapt, with regular reviews.

·         Loss and Damage: The consequences of the developed world’s historical failure to cut their emissions adequately are already resulting in permanent losses and damage for the most vulnerable. Responsibilities have to be acknowledged and promised measures delivered

With the G7 summit in June failing to make concrete progress on climate finance or even agreeing a timetable for the phase out of coal there remains a huge amount of work to be done before COP26 begins in November.

The need for much greater progress has only been highlighted further by the extreme weather which continues to cause death and destruction around the globe.

Without this 5-point plan, developing country leaders warn that the outcome of the Glasgow summit will be worthless and end in failure.  The plan has been developed and endorsed by Government leaders representing countries and UN negotiating blocs which make up more than half the nations of the world.

“Rising climate impacts, the Covid19 pandemic and escalating debt crises in low-income countries make it clear that the only solution to address multiple crises is to strive for international solidarity, fairness and prosperity for all.

This new report: COP26 Five-Point Plan for Solidarity, Fairness and Prosperity published by organisations from the global South, lays out clear benchmarks for success in COP26, anything short will be considered a failure. Centering the needs of vulnerable communities, delivering finance to implement the Paris Agreement and a just transition to clean energy requires unprecedented levels of international cooperation, solidarity and commitment by political leaders to act in good faith and implement the Paris Agreement.

The science is clearer than ever: the 1.5 ℃ goal that countries committed to under the Paris Agreement is our only chance to protect people and ecosystems and it is attainable. This is the moment for world leaders to rise to the challenge.

COP26 will be both a moral and practical test that will define the legacy of political leaders: earning them a badge of honour for steering the world through this critical time, or bearing the shame of being complicit in our demise.”

“Kenya’s farmers and pastoralists continue to count increasing losses from the adverse impacts of global warming.  The UN Climate Change Summit in Glasgow, COP26, should deliver on the protection of the planet and its people from the ravages of climate change.  The summit should address the needs of the vulnerable and poor people of the world whose struggle everyday is made ever so difficult by worsening climate change impacts. The Solidarity Package seeks to address these issues.”

Prof Fekadu Beyene, Minister for the Environment, Forest, and Climate Change Commission of the Federal Democratic Republic of Ethiopia

“A lack of keeping promises on these key areas of finance, adaptation, and loss & damage is unacceptable. “What’s the point of agreeing on a new set of promises if we don’t keep them? This document lays out a path to delivering a successful COP26 that responds to the urgency of the climate crisis and restores faith to the negotiations.”

“Jamaica, whose contribution to climate change is ridiculously insignificant already submitted a very ambitious NDC, which almost doubles its clean and renewable energy target. We do not expect less efforts from major emitters. There is no more time for lips service, this is the time for action. Keeping 1.5 degree alive & within reach is at stake.  The survival of millions of people from the most vulnerable communities is in our hands. With political will, we can get both the ambition and solidarity we need. Time is ticking. let’s act.”

Tanguy Gahouma-Bekale of Gabon, the Chair of the Africa Group of Negotiators (AGN):

“Developed countries are currently not pulling their weight or keeping their promises on their obligations to provide climate finance. Like any negotiation, you need to have faith that pledges and commitment will be met. In 2009 and 2015, they promised to deliver climate finance by 2020. Yet, this is still to be met, and we don’t have a clear plan to achieve it. ”

“Despite Covid understandably taking the headlines, climate change has been getting worse over the past year as emissions continue to rise and the lives and livelihoods on the front line suffer.

“We vulnerable countries are not asking for much. Just that richer countries, who have caused this problem, take responsibility by cutting their emissions and keeping their promise to help those their emissions have harmed.  The world is waking up to the reality of climate change and we need to see nations responding to show they are acting on it.”

“COP26 needs to be a summit where we see action not words. We have enough plans: what we need is for major economies to start delivering on their promises. Our economies are suffering in the face of increased climate impacts and budgetary strains: either we invest our way out of this mess or we face a brutal decade of loss and damage”

“Climate change is the biggest threat to our survival. Highly vulnerable countries like Somalia are already suffering disproportionally from the impacts of climate change. COP 26 must be a key moment of delivery and there can be no more excuses for unfulfilled promises,  particularly climate finance. This document sets out key priorities that are pointers of success at Glasgow, an opportunity to deliver solidarity, fairness, and prosperity for all.”

Diego Pacheco, Head of Delegation at the UNFCCC for Bolivia:

“This five-point plan is the basis for a roadmap to a successful COP26 summit, which is in line and should be complemented with the “call for urgent and equitable action to halt the climate collapse and restore balance with Mother Earth” proposed by the Bolivian government to the UNFCCC.  It is what climate action looks like.  For decades rich countries have claimed they recognize the clear injustice of the climate crisis and will act to fix this.  But so far, they have failed.  This document in conjunction with the Bolivian call is the test to see if they are serious.”

“This report reflects the demands vulnerable countries have long expected. The emergency setting we’re in requires bold measures, real leadership, which this report shows with great clarity. Don’t just read it, take action, echo the calls and make yourself heard.

“In the climate crisis, winning slowly is losing, standing still is moving backwards. I urge all parliaments to heed the five-point plan in this report. Act on mitigation, adaptation, finance, loss & damage, and means of implementation together. Failure is unacceptable.

“Vulnerable countries are not asking only for solidarity. We expect to achieve prosperity despite the climate crisis. This report shows how we can do more than just survive. It offers ways in which we can thrive, if we locate climate justice at the centre of our agenda.”

“We need developed countries to meet the $100 billion per year pledge, with 50% for adaptation. Mobilized finance must reach the most vulnerable countries and communities. Each of the AOSIS’s 28 accredited entities to the Green Climate Fund and the Adaptation Fund, have had less than two projects approved and many had none approved at all.”

“For many people around the world, including Tanzania, climate is already having an impact on people’s lives.  That is why we need to see greater focus on helping affected communities  adapt to these impacts.  At the same time if poorer countries are going to be expected to leapfrog fossil fuels we need help in the form of renewable energy technology and capacity building to help us keep our emissions low and enable us to deliver our national climate plans under the Paris Agreement.”

Ambassador Seyni Nafo, spokesperson for the Africa Group of Nations at COP26:

“All we African countries are doing is asking richer nations to fulfil their promises.  The promises made by developed countries in Copenhagen in 2009 and again in the Paris Agreement are unequivocal and must be delivered. Financing for adaptation, at the same level as that for mitigation, is what’s needed to allow for our climate vulnerable countries to adapt to the inevitable climate impacts”