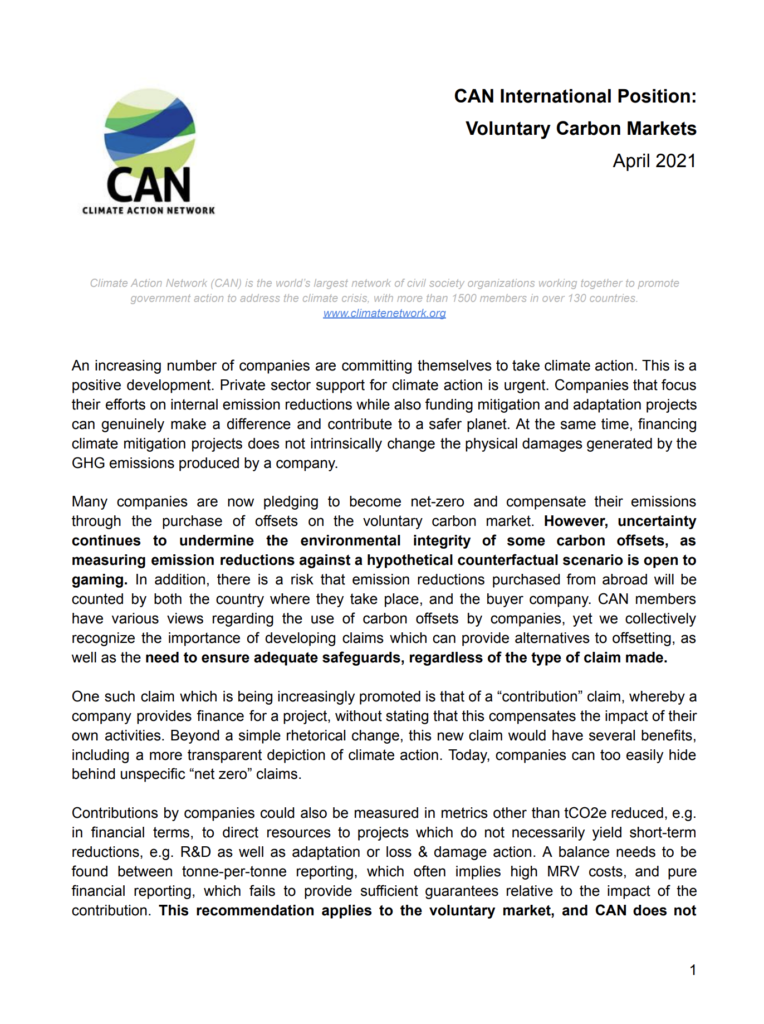 An increasing number of companies are committing themselves to take climate action. This is a positive development. Private sector support for climate action is urgent. Companies that focus their efforts on internal emission reductions while also funding mitigation and adaptation projects can genuinely make a difference and contribute to a safer planet. At the same time, financing climate mitigation projects does not intrinsically change the physical damages generated by the GHG emissions produced by a company.

Many companies are now pledging to become net-zero and compensate their emissions through the purchase of offsets on the voluntary carbon market. However, uncertainty continues to undermine the environmental integrity of some carbon offsets, as measuring emission reductions against a hypothetical counterfactual scenario is open to gaming. In addition, there is a risk that emission reductions purchased from abroad will be counted by both the country where they take place, and the buyer company. CAN members have various views regarding the use of carbon offsets by companies, yet we collectively recognize the importance of developing claims which can provide alternatives to offsetting, as well as the need to ensure adequate safeguards, regardless of the type of claim made.

One such claim which is being increasingly promoted is that of a “contribution” claim, whereby a company provides finance for a project, without stating that this compensates the impact of their own activities. Beyond a simple rhetorical change, this new claim would have several benefits, including a more transparent depiction of climate action. Today, companies can too easily hide behind unspecific “net zero” claims.

Contributions by companies could also be measured in metrics other than tCO2e reduced, e.g. in financial terms, to direct resources to projects which do not necessarily yield short-term reductions, e.g. R&D as well as adaptation or loss & damage action. A balance needs to be found between tonne-per-tonne reporting, which often implies high MRV costs, and pure financial reporting, which fails to provide sufficient guarantees relative to the impact of the contribution. This recommendation applies to the voluntary market and CAN does not support the use of non-CO2 metrics in compliance markets, e.g. under article 6 of the Paris Agreement.

The contribution model could be integrated within a “levy and fund” approach whereby a company sets itself an internal carbon price and allocates the associated funds to climate projects.

This new system does not preclude the use of carbon credits, and appropriate safeguards will continue to be needed. Note that credits could be purchased without claiming compensation or “net-zero”. Carbon credits are not necessarily carbon offsets. While some of the existing voluntary carbon market infrastructures could be retained, it will need to evolve in significant ways. Rules relating to environmental integrity, including additionally, permanence, and baseline-setting should be thoroughly reviewed, and the right infrastructure to enable the application of corresponding adjustments should be established. Finally, projects should be encouraged to increase their engagement with host countries to ensure that funds are directed where they can make the biggest difference.

To conclude, we collectively support the development and promotion of alternative claims, in particular a contribution claim, and encourage companies to move in this direction as a possible alternative to offsetting.