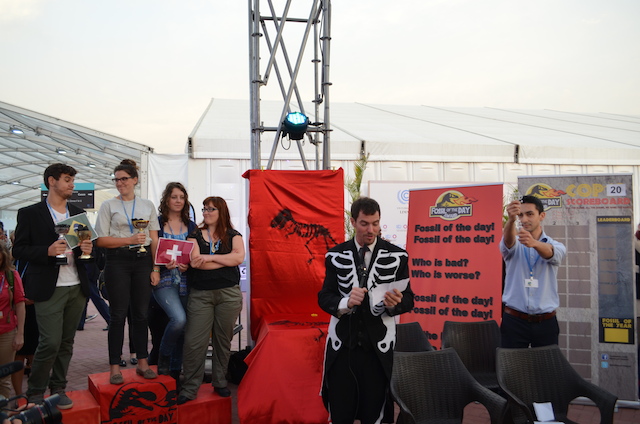 Switzerland earns today’s first place Fossil of the Day for being a big bully. As anyone who listens to civil society or a climate scientist will know, we have to do much more if we want to keep temperature rise to within the internationally agreed threshold of 2degreesC. Predictable public climate finance to help developing countries to scale up their climate actions will help grease the ambition wheel. Switzerland, in an intervention today, not only opposed any legally binding commitments of finance, but also threatened developing countries that any demands for such would jeopardize the outcome here in Lima. Other developed countries, EU and the US came close to earning a fossil too as they didn't exactly paint themselves in glory either when they also strongly rejected commitments on finance.

Brazil stated in the Framework for Various Approaches Contact Group that “there is no double counting in the CDM.” As numerous scientists have documented, double-counting of emissions is a serious problem with the Clean Development Mechanism. New, robust accounting rules that stamp out such practices are seriously needed to ensure the integrity of our efforts to combat climate change. This statement undermines climate action and earns Brazil a second place Fossil.

AOSIS received the Ray of the Day award today for being the first group to directly support during this COP the complete phase out of carbon pollution by 2050. What makes this statement even more powerful is that other countries added their voices to that of AOSIS, specifically AILAC and Norway. Achieving this phase out of fossil fuel emissions and a just transition to 100% RE by mid century is our only hope to stay below the 2 degrees threshold. Countries also need to ensure that there is enough financial and technological support to have developing countries achieve transition. Shifting investments and subsidies from fossil fuels to renewable energy is a good start.

About CAN: The Climate Action Network (CAN) is a worldwide network of over 900 Non-Governmental Organizations (NGOs) in more than 100 working to promote government and individual action to limit human0induced climate change to ecologically sustainable levels. www.climatenetwork.org

About the fossils: The Fossil of the Day awards were first presented at the climate talks in 1999, in Bonn, initiated by the German NGO Forum. During United Nations climate change negotiations (www.unfccc.int), members of the Climate Action Network (CAN), vote for countries judged to have done their 'best' to block progress in the negotiations in the last days of talks.

About the rays: CAN, gives out the 'Ray of The Day' award to the countries who are a ray of hope over the past days of negotiations at the UN climate change conference. This ‘Ray of Solidarity’ is in the same spirit.