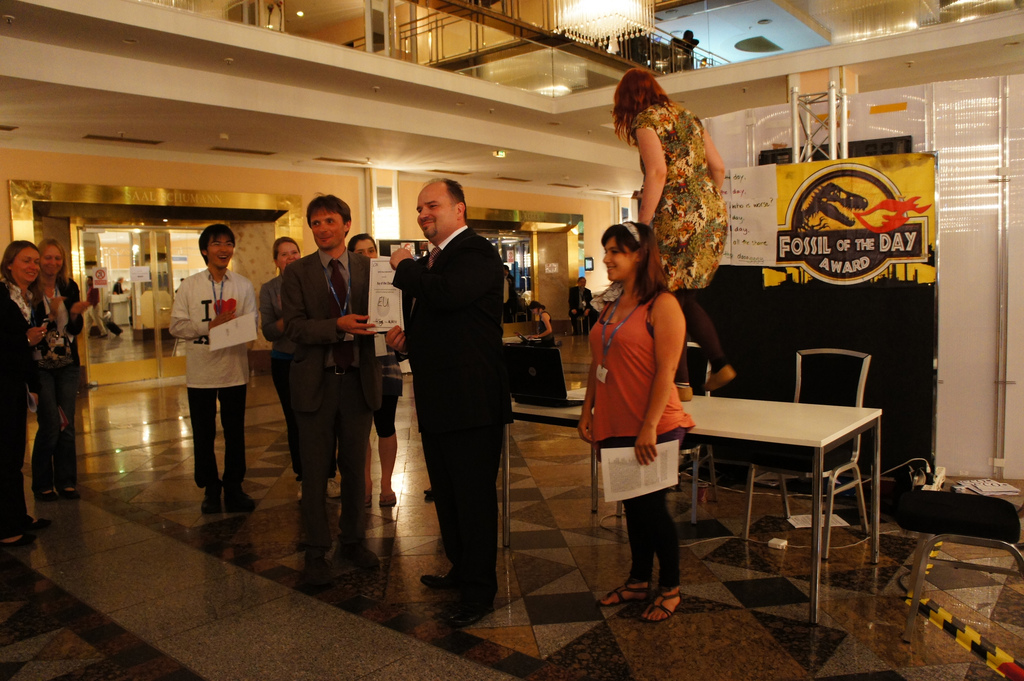 A Slew of Fossils and Rays Awarded On Second to Last Day of Bonn Talks
Bonn, Germany – With just over a day left in the United Nations climate change
negotiations here, countries showed they still have plenty of energy left to delay
progress in the fight against climate change, while other nations showed they
recognized how important civil society is in moving the negotiations forward.
Frequent “winner” Saudi Arabia took another Fossil, joined this time by a surprise
blocker, Antigua and Barbuda, for trying to diminish civil society's role in the talks.
Meanwhile, four nations and the European Union earned a rare Ray of the Day for
supporting the very same civil society groups. Both were overshadowed by the fossil
for Japan's renewed refusal to extend its namesake Kyoto Protocol.

The Fossils as presented read:

"The Second place Fossil goes to Saudi Arabia and Antigua and Barbuda for blocking
attempts to enhance NGO participation. Saudi Arabia is a frequent winner of these
awards and really needs no explanation. They have a long history of blocking just
about everything from legal issues to adaptation, agendas to observer participation.
The Saudis should be isolated for their obstructionist ways and not allowed to dictate
text on this or any other issue. As for Antigua & Barbuda, it breaks our heart to give
your individual country the fossil, but to suggest that we would be moving too fast to
allow NGOs to make interventions without submitting written statements in advance
is just ridiculous! In the fight against climate change, speed is of the essence! For
prompting a lack of engagement and transparency, you two get the fossil!"

"Japan earns the First place Fossil. Yesterday, we heard again Japan’s well known
position that it will not inscribe a target under a second period of the Kyoto Protocol
under ANY circumstance. It is very regrettable that we see no room for flexibility.
The Kyoto Protocol second commitment period is the heart of a Durban package and
Japan’s unchanged position will jeopardize the success of the Durban meeting.
Market mechanisms, which Japan favors so much, may not be used anymore if Japan
doesn’t have a target under the Kyoto Protocol. Is this really OK, Japan? Lack of a
target under the international legal framework would weaken implementation of
domestic policies and actions and lose international competitiveness in a low carbon
economy. We don’t really understand."

"The Ray of the Day goes to a group of countries who have stood strong for
transparency in the face of attacks from countries hoping to hide behind closed doors.
They clearly recognize the productive and important role NGOs play in this process
and have done all they can to suggest improvements, propose compromises, and shine
a light on this process in the hopes of supporting not only civil society but in so doing
also the global effort to address climate change. On a side note, if more Parties had
similar positions on transparency to these, perhaps we could avoid protracted fights
on agendas and other matters in the future, simply in order to avoid embarrassment.
For these actions in support of transparency, accountability and civil society, we
award this Ray of the Day to the EU, Mexico, Bolivia, Philippines, and Australia."
_____________________________________________________________________
About CAN: The Climate Action Network is a worldwide network of roughly 500
Non-Governmental Organizations (NGOs) working to promote government and
individual action to limit human-induced climate change to ecologically sustainable
levels. www.climatenetwork.org
About the fossils: The Fossil of the Day awards were first presented at the climate
talks in 1999  in Bonn, initiated by the German NGO Forum. During United Nations
climate change negotiations (www.unfccc.int), members of the Climate Action
Network (CAN), vote for countries judged to have done their 'best' to block progress
in the negotiations in the last days of talks.
###