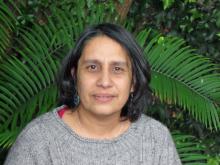 Tasneem Essop is an expert on climate, energy, poverty and social justice issues and is the Founding Director of the Energy Democracy Initiative in South Africa.

South African born and based, Ms Essop has significant experience in the climate movement. She has held various senior government positions in South Africa. She was a global climate policy and strategy leader for environmental NGO WWF International and served as the Head of Delegation for the organisation at the UNFCCC including at the Paris COP. During this period she also served on the Board of the Global Call for Climate Action (GCCA) and was an active participant in the work of CAN International.

Tasneem is also serving her second term as Commissioner in the National Planning Commission of South Africa. She was also recently appointed to the Board of Sanparks, the leading conservation authority in South Africa.

Before becoming a Member of the Western Cape Provincial Legislature in 1994, she was a trade unionist in COSATU Western Cape. She is a qualified teacher.

Her vast management and leadership experience include convening and building consensus around common goals amongst stakeholders from government, labour, business and communities, building collaborative partnerships, working in virtual teams across cultures, and building strong organisational governance, with an emphasis on finance.