COP26 must deliver on loss and damage finance 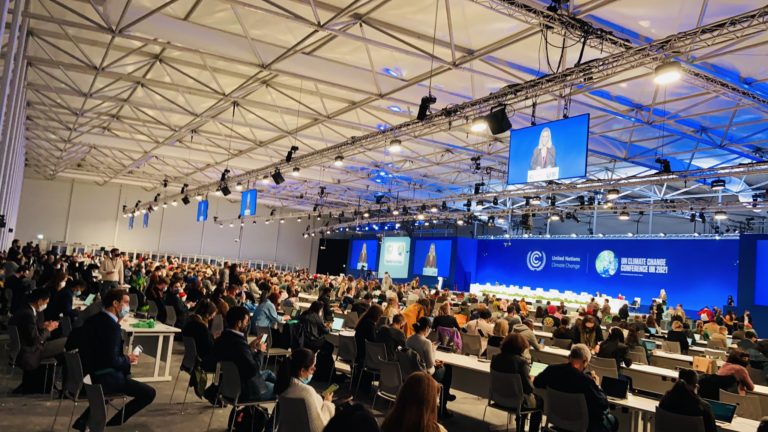 Climate change already impacts and threatens billions of lives, with billions more on the line: it is those that have done the least to cause climate change that are most impacted, especially women, Black, Indigenous Peoples, and people of colour, peasants and rural people, youth, people with disabilities, local communities and frontline communities.

The climate crisis also amplifies the structural inequalities and injustices that have been hardwired into our economic and political systems that have resulted in a spiralling debt crisis, Covid vaccine apartheid and growing inequality and poverty.

Governments in the UNFCCC have repeatedly failed to deliver meaningful and just outcomes that will keep the global temperature rise below 1.5 degrees Celsius despite growing urgency: time is running out.

Countries of the global North have the greatest historical responsibility for emissions and have grown rich through centuries of colonisation and exploitation of communities and nations in the global South. These countries, including the US, Canada, UK, Australia, Norway, Japan and those in the EU must finally do their fair share to address the climate crisis and pay their climate debt without delay.

Throughout the existence of the UNFCCC, governments have moved from policies, to empty pledges, to press releases and proclamations made outside the negotiations process that mean they cannot be held to account for failing to meet them. “Net zero” pledges without concrete plans to achieve Real Zero emissions, without adequate  legally binding commitments to protect human rights, are simply greenwashing, a smokescreen hiding the intent to continue polluting  and digging the graves of our present and future generations with impunity.

People are tired of waiting for governments to prioritize people and the planet over profits while so many lives are being impacted and lost. We are out of time and out of patience.

They must do this by providing new and additional short and long term finance, based on the needs of the peoples of the Global South, balanced between mitigation and adaptation. The first immediate step is for these countries to fix the broken commitment of delivering the inadequate $100 billion in public finance by 2020.

And rapidly scale up finance for adaptation based on the needs of those most impacted.

Delivery of additional finance for Loss and Damage based on needs is made and honored. The Santiago Network on Loss and Damage must be operationalised by no later than COP27.

Governments must ensure that their emission reduction targets are sufficient to meet the 1.5°C   target by urgently strengthening 2030 targets to rapidly reduce emissions to Real Zero, fully in line with each countries’ fair share.

Governments must ensure that their emission reduction targets are sufficient to meet the 1.5°C   target by urgently strengthening 2030 targets to rapidly reduce emissions to Real Zero, fully in line with each countries’ fair share.

Governments must  categorically reject false solutions and the “net zero” plans that disguise intentions to continue polluting . This includes offsetting, carbon markets, carbon capture technologies, nature based solutions, geoengineering, climate smart agriculture, and others that are inherently ineffective,unjust, and destructive.

Governments must keep the promise of the Paris Climate Agreement and ensure that these rights remain central in the outcomes of COP26 including the rights of Indigenous Peoples, peasants rights, Gender rights, rights of people with disabilities, workers rights.

Parties to the UNFCCC should officially and permanently remove Big Polluters from deliberations where they consistently undermine, weaken, and delay meaningful policy outcomes. And develop paths for the liability of polluters to make them pay for the crisis and repair the damage they have done.

Parties must deliver just transitions as defined in the Paris Agreement with reference to decent work and quality jobs. Labour rights are human rights and countries must guarantee full engagement of workers and their unions through social dialogue processes in raising climate ambition and the creation of decent work, quality jobs, social protection and universal public services.

A justice transition must also result in collaborating to rapidly share technology and finance to implement real, proven, and people-centered solutions at scale. This must involve a “fair share phase out” to equitably eliminate fossil fuels from the global economy in time to limit warming below 1.5°C, with developed countries taking the lead on a rapid and just phase out of fossil fuel production, while supporting developing countries to do the same. It also requires transforming energy and food systems that empower people and communities, ecological restoration, and food sovereignty. It is vital that these transitions honour and protect the traditional knowledge, practices, and territories of indigenous peoples and local communities.

Prioritize an  inclusive, democratic and just UNFCCC process that recognises and respects all rights-holders. This requires the meaningful inclusion of Persons with Disabilities by recognizing them as a formal constituency.

The time for words without action has come and gone. We no longer have the luxury of time to sit back and allow governments and private interests to destroy our future. Scientific predictions are increasingly dire; it is not hyperbolic to assert that the very future of humanity depends on the outcomes of these negotiations. Governments must immediately heed the growing demands of those already facing crisis and those who will face crisis and bravely reimagine our world in a way that guarantees everyone the right to live with dignity and in harmony with our planet.

The Era of Injustice is over!

Mask Up and Demand COP26 to #PayUp4LossandDamage 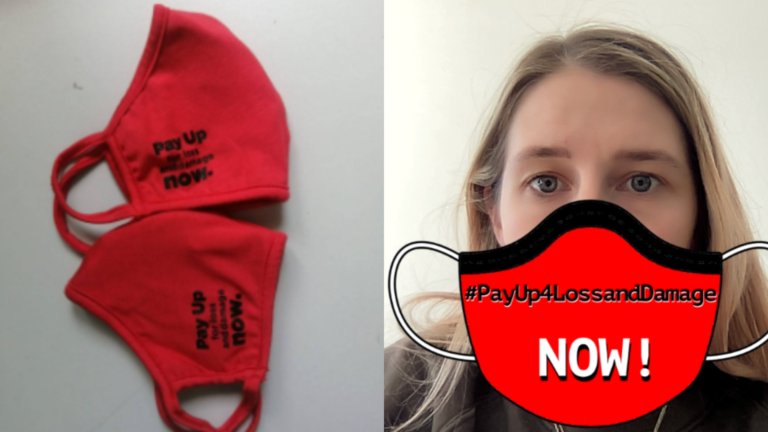 If you are in Glasgow, and especially if you are exposed to parties/negotiators, get one of these masks from some of our colleagues on the ground (you may reach out to Francesca or Anna), wear the masks and take a selfie with the mask on and post it on social media.

For those not in Glasgow,, download this virtual mask which you can upload and “wear” on Zoom (instructions here) and take a photo and post it on social media

We will not be silenced! World leaders at #COP26 should listen to the people and the most vulnerable communities and urgently address finance for #LossandDamage⚠️. Polluters must #PayUP4lossandDamage!

Open letter to World Leaders by over 300 organisations

On 26 October 2021, more than 300 civil society organisations sent an open letter to COP26 President Elect Alok Sharma and other world leaders demanding that COP26 urgently commit to deliver finance on Loss and Damage.

The letter and signatories may be viewed below.

AN OPEN LETTER TO WORLD LEADERS

We, the undersigned, from over 300 organisations from across the world, spanning a broad range of institutions and movements, from humanitarian and development organisations to youth groups, Indigenous Peoples organisations, trade unions and climate justice groups, call on you today to ensure that COP26 delivers finance for loss and damage.

Loss and Damage – the impacts of climate change that were not averted or minimized through adaptation and mitigation activities – is already a lived reality for people around the world, violating their human rights and displacing more than 30 million people in 2020 alone. Poor and vulnerable countries and communities are least responsible for climate change but are already facing the majority of its negative impacts, in the form of both extreme weather events like hurricanes, and floods and slow onset processes such as sea-level rise.

The projected economic cost of loss and damage by 2030 is estimated to be between 290 and 580 billion USD in developing countries alone. Scaled up finance at a level commensurate with the need is therefore essential for vulnerable countries and communities to recover from the climate impacts they are already facing to rebuild their livelihoods and economies. While finance for averting and minimising Loss and Damage has been mobilised in the form of finance for mitigation and adaptation, finance for addressing Loss and Damage remains lacking, apart from highly insufficient humanitarian aid.

Drawing on the recent research by the Stockholm Environment Institute’s research as well as a series of briefing papers published by the Heinrich Böll Stiftung, we demand that the COP26 delivers on Loss and Damage finance by taking the following actions:

1. Decide at COP26 to provide sufficient and needs-based Loss and Damage finance, in addition to the USD 100b per year committed for mitigation and adaptation, on the basis of equity, historical responsibility and global solidarity, applying the polluter pays principle. Loss and Damage finance to be also included in the post-2025 climate finance target.

2. Establish a process to identify the scale of funding needed to address Loss and Damage as well as suitable  mechanisms to deliver the finance to developing countries. The outcome must be presented at COP27 to start delivering Loss and Damage finance.

3. Support developing countries in enabling national level systems to distribute Loss and Damage finance to ensure country ownership, gender responsiveness and self-determination over how finance is used, and so it reaches the populations that are most vulnerable and in need. This could be facilitated by the fully operationalised Santiago Network for Loss and Damage.