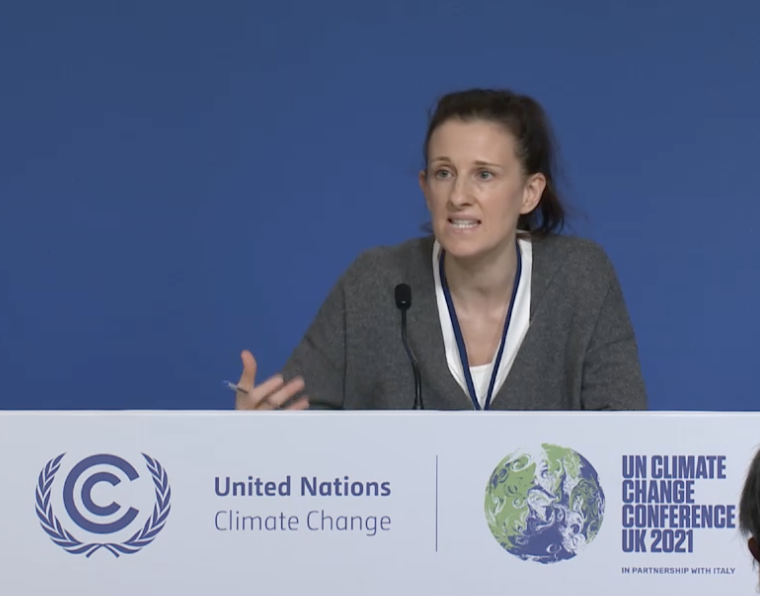 “Support for loss and damage cannot be left to random acts of charity, we need a robust finance system in place”

9 November, Glasgow: Governments are refusing to face up to the climate crisis and, as a result, the world’s poorest countries and communities continue to suffer whilst they have the least responsibility for causing it, today’s Climate Action Network (CAN) media briefing heard.

Although the current text recognises the reality of loss and damage and that more finance is needed to compensate communities for it, richer countries are failing to step up. CAN representatives are demanding that out of responsibility and solidarity, these countries stop blocking progress on this issue and commit to concrete commitments and action if Glasgow is to be a success.

The briefing also heard that, since the first COP 27 years ago, there has been no mention of fossil fuels in any conference text, which was like “writing a book on weight loss without talking about food”.

Another step countries must commit to is the yearly revision of Nationally Determined Contributions (NDCs), to meet the Paris goal of 1.5C degrees warming. And the final text must include a commitment to phase out new fossil fuels, in line with expert guidance.

Tracy Carty, Head of Delegation COP26, Oxfam, welcomed the arrival of ministers to the discussion at this “crisis COP” and called for three outcomes; to close the emissions gap for 1.5C; provide finance for loss and damage; and for the scaling up of adaptation finance.

Tracy said: “This is a crisis COP that we need to come out with clear and unambiguous commitments that keep 1.5C within reach. This is the first moment when ambition needs to be raised and it’s the first test of the Paris Agreement ratchet mechanism. What happens here is going to shape the emissions trajectory for the next decade.

“Support for loss and damage cannot be left to random acts of charity. We need a robust finance system in place and new sources of support for countries suffering from loss and damage that goes beyond humanitarian aid. There are four days left and there’s everything to play for to ensure Glasgow is remembered for the right reasons.”

Talks on fossil fuel reductions must be introduced into the talks and empty promises with high targets and low implementation that have neither policies nor money behind them must end, according to Juan Pablo Osornio, Head of Delegation at COP26, Greenpeace International.

Juan Pablo said: ”It is inconceivable that in the 27 years of COP talks there has never been a mention of fossil fuels in the text. We also need to have enough financial contributions to deliver a just transition away from fossil fuels and towards decarbonisation.

“We should be courageous and brave enough to call out those parties who are not helping move the process forward. Crucially we also need solidarity with Global South nations, or we’ll be actively blocking their transition to a fossil fuel free economy, which will hold up progress for us all.”

As gender Day is celebrated at COP26, Chikondi Chabvuta, Southern Africa Region Advocacy Advisor, CARE International, shared her experiences of working with smallholder women farmers in Malawi who are facing a range of extreme weather events that are impacting on their livelihoods. However much they try to adapt to these climate crises they can never do enough and are calling for progress in Glasgow.

Chikondi said: “Women at the frontlines of the climate crisis have pinned their hopes on COP26 to deliver on loss and damage. There is a lot of talk about this in Glasgow, but it needs to be translated into real finance that doesn’t further deplete an already small pot for adaptation. Impacted women are holding their leaders to a high moral standard, and they need them to deliver because they shouldn’t have to pay for the losses that they are experiencing. If anything, women nurture the earth, and COP26 has to come through for them and bring them hope.”

Iemaima Vaai, Ecumenical Enabler, Pacific Conference of Churches, added: “Our climate reality in the Pacific is now having to accept relocation as an adaptation measure.

“​​Coastal communities have had to transition from a marine reliance community to taking up new skills and knowledge on farming when relocating inland. They have had to experience a loss in knowledge and a disconnect to their land as they are faced with no other choice but to leave their ancestors behind. What makes it worse is these communities are having to pay for the majority of these relocation costs even though they contribute the very least to this climate crisis.”