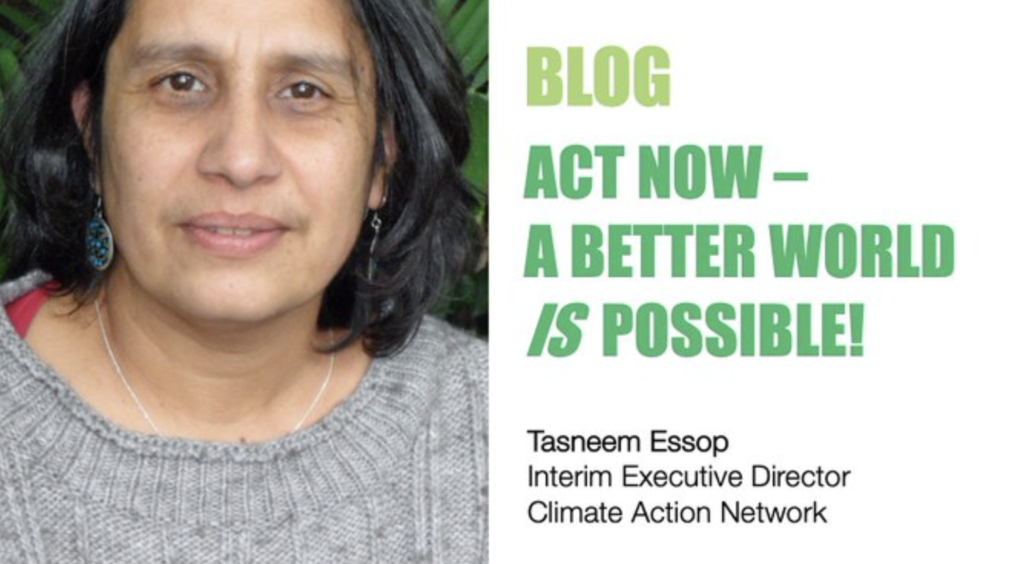 The people have spoken. The people are acting. Around the world on Friday, over 4 million marched to demand their leaders take urgent action to respond to the growing climate emergency we face. But the power represented by the climate marchers does so much more than avert climate disaster: it also helps address the social and economic injustice that makes so many hundreds of millions of people so vulnerable to a changing climate.

We are at a turning point in our response to the climate crisis. As the impacts of a destabilised climate are  frighteningly real, and the scientific and socio-economic case for action becomes overwhelmingly clear, a revolution is beginning that our political leaders can no longer ignore or stop.

The climate marches, building on the engaged, sustained, energised and organised power on the ground  will force governments and businesses alike to increase their ambition to act or risk becoming irrelevant.

That increase in ambition is long overdue. Scientists and activists have been warning of a looming climate emergency for years. Frontline and indigineous communities have been fighting for years. Despite these warnings, and despite the warm words and empty commitments of international climate treaties, greenhouse gas emissions continue to rise. For all the progress in developing low-carbon technology, and bringing down the cost of renewables, little has been done to challenge the power of vested fossil fuel lobbies.

So what does that increased ambition look like? The science is clear: immediately, all countries must halve their emissions by 2030, set out a clear path of actions that get us to zero or near zero emissions by the middle of the century.  We will need this if we are to avoid the worst impacts of climate change while recognising that this level of action still only will only reduce risks by 50%.

The first step in this process must be rapid elimination of the use of fossil fuels in power generation, transport, industry and agriculture. Coal – that most polluting energy source – must be phased out first. The fossil fuel industry  must be faced down and brushed aside.

The rich industrialised world has a moral obligation to both lead this process and to support developing countries with finance as they decarbonise. We are calling for wealthy countries to meet their long-standing obligation of providing $100 billion in climate finance each year, including by doubling their contributions to the UN’s Green Climate Fund this year.

In addition, the poorest and most vulnerable people, especially women and girls, are facing the greatest impacts from climate change, despite having made almost no contribution to the problem. Rich countries should support the most vulnerable to deal with the loss and damage caused by climate change, by providing additional finance of at least $50 billion per year up to 2022.

But this ambition, these efforts, and the financial flows involved are not just about averting disaster – they also promise enormous progress in promoting development, equality and economic and social justice. According to the International Governmental Panel on Climate Change’s Report on 1.5 degrees celsius, the measures required to decarbonise the global economy and protect the world’s climate could also – with the right political will and foresight – help us meet the Sustainable Development Goals, ensuring a better future for billions around the world. It calls for rapid and radical transformation of our economic, financial, social and political systems.

For example, the renewables revolution promises to democratise and distribute energy generation, giving resource-poor countries and communities the ability to produce their own energy, and end dependence on fossil fuel companies. It promises to create millions of well-paid jobs, livelihoods and ownership; and, by eliminating local pollution, it will help people live longer, healthier lives, and cut billions of dollars of healthcare costs.

Protecting and enhancing forests will not only help store and absorb enormous quantities of carbon emissions, it will also help ensure the provision of ecosystem services – such as clean water, clean air, flood control and food security – on which hundreds of millions depend. Creating sustainable transport systems, which combine public transport with walking and cycling, will make our cities more pleasant and liveable, and will generate public health benefits. Adopting an agro-ecological approach to agriculture can increase yields for, and improve the resilience of the world’s food systems.

The IPCC 1.5°C report sent a clear message that addressing climate change has the potential to also address key sustainable development challenges, contribute to poverty eradication  and help address inequality around the world. This message has not been given sufficient attention by governments, even though they adopted the 1.5 Report.

Politicians, corporates and all should realise that the momentum that is building around climate action can and must put addressing structural inequality, poverty, and human rights at the center of our plans to address the climate emergency.

A better world is possible. And the people are ready to fight for it.