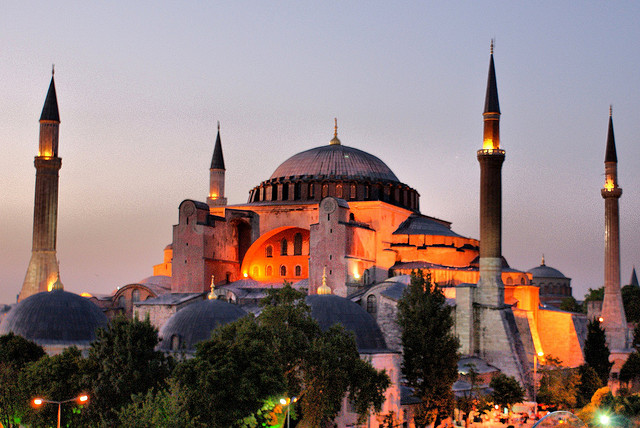 Istanbul, Turkey – 18 August. Islamic leaders from 20 countries today launched a bold Climate Change Declaration to engage the world’s 1.6 billion Muslims on the issue of our time.

Adopted by the 60 participants at the International Islamic Climate Change Symposium, (Istanbul, 17-18 August) the Declaration urges governments to deliver a strong, new international climate agreement in Paris this December that signals the end of the road for polluting fossil fuels by creating architecture that will give us a chance of limiting global warming above pre-industrial levels to 2, or preferably 1.5, degrees Celsius.

The Declaration presents the moral case, based on Islamic teachings, for Muslims and people of all faiths worldwide to take urgent climate action. It was drafted by a large, diverse team of international Islamic scholars from around the world following a lengthy consultation period prior to the Symposium. It has already been endorsed by more than 60 participants and organisations including the Grand Muftis of Uganda and Lebanon. The Declaration is in harmony with the Papal Encyclical and has won the support of the Pontifical Council on Justice and Peace of the Holy See.

The Declaration calls for a rapid phase-out of fossil fuels and a switch to 100% renewable energy as well as increased support for vulnerable communities already suffering from climate impacts. It can be seen as part of the groundswell of people from all walks of life calling for governments to scale up the transition away from fossil fuels. Wealthy and oil-producing nations are urged to phase out all greenhouse gas emissions by 2050. All people, leaders and businesses are invited to commit to 100% renewable energy in order to tackle climate change, reduce poverty and achieve sustainable development.

Amongst keynote speakers at the Symposium were three senior UN officials – from the UN Environment Programme, the secretariat of the UN Framework Convention on Climate Change and the UN Secretary-General’s climate change team. Presentations were also made by scientists, NGO leaders and academics. Also attending were religious leaders from many other faith traditions.

That the Symposium was held in Istanbul is significant – just two weeks before the Paris Summit, for the first time in history, the G20 summit will be organized by the presidency of Turkey, a country with a majority Muslim population.  Leaders from the world’s largest 20 economies will gather in an  attempt to reach agreement on how international financial stability can be achieved. The economic implications of climate change and the huge amounts of subsidies given by G20 countries to the polluting fossil fuel industry will also be on the agenda.

“On behalf of the Indonesian Council of Ulema and 210 million Muslims we welcome this Declaration and we are committed to to implementing all recommendations. The climate crisis needs to be tackled through collaborative efforts, so let’s work together for a better world for our children, and our children’s children.” – Din Syamsuddin, Chairman of the Indonesian Council of Ulema

“I am proud to be associated with the Islamic Declaration on Climate Change released in Istanbul today. As a Muslim I try to follow the moral teachings  of Islam to preserve the environment and help the victims of climate change. I urge all Muslims around the world to play their role in tackling the global problem of climate change.” – Dr Saleemul Huq, Director of Institute of Environmental Studies

“The basis of the declaration is the work of world renowned islamic environmentalists, it is a trigger for further action and we would be very happy if people adopted and improved upon the ideas that are articulated in this document.” – Fazlun Khalid, Founder, Islamic Foundation for Ecology and Environmental Sciences

“It is with great joy and in a spirit of solidarity that I express to you the promise of the Catholic Church to pray for the success of your initiative and her desire to work with you in the future to care for our common home and thus to glorify the God who created us.” – His Eminence Cardinal Peter Turkson, President of the Pontifical Council for Justice and Peace, Vatican City

“A clean energy, sustainable future for everyone ultimately rests on a fundamental shift in the understanding of how we value the environment and each other. Islam’s teachings, which emphasize the duty of humans as stewards of the Earth and the teacher’s role as an appointed guide to correct behavior, provide guidance to take the right action on climate change.” – Christiana Figueres, Executive Secretary, UNFCCC

“Civil society is delighted by this powerful Climate Declaration coming from the Islamic community, which could be a game changer, as it challenges all world leaders, and especially oil producing nations, to phase out their carbon emissions and supports the just transition to 100% renewable energy as a necessity to tackle climate change, reduce poverty and deliver sustainable development around the world.” – Wael Hmaidan, International Director of Climate Action Network

You can find photos available for use under creative commons license here, please credit Islamic Relief

3.1 We call upon the Conference of the Parties (COP) to the United Nations Framework Convention on Climate Change (UNFCCC) and the Meeting of the Parties (MOP) to the Kyoto Protocol taking place in Paris this December, 2015 to bring their discussions to an equitable and binding conclusion, bearing in mind –

·       The scientific consensus on climate change, which is to stabilize greenhouse gas concentration in the atmosphere at a level that would prevent dangerous anthropogenic interference with the climate systems;

·       The need to set clear targets and monitoring systems;

·       The enormous responsibility the COP shoulders on behalf of the rest of humanity, including leading the rest of us to a new way of relating to God’s Earth.

3.2 We particularly call on the well-off nations and oil-producing states to –

·       Lead the way in phasing out their greenhouse gas emissions as early as possible and no later than the middle of the century;

·       Provide generous financial and technical support to the less well-off to achieve a phase-out of greenhouse gases as early as possible;

·       Recognize the moral obligation to reduce consumption so that the poor may benefit from what is left of the earth’s non-renewable resources;

·       Re-focus their concerns from unethical profit from the environment, to that of preserving it and elevating the condition of the world’s poor.

3.3 We call on the people of all nations and their leaders to –

•       Commit themselves to 100 % renewable energy and/or a zero emissions strategy as early as possible, to mitigate the environmental impact of their activities;

·       Invest in decentralized renewable energy, which is the best way to reduce poverty and achieve sustainable development;

·       Realize that to chase after unlimited economic growth in a planet that is finite and already overloaded is not viable. Growth must be pursued wisely and in moderation; placing a priority on increasing the resilience of all, and especially the most vulnerable, to the climate change impacts already underway and expected to continue for many years to come.

·       Set in motion a fresh model of wellbeing, based on an alternative to the current financial model which depletes resources, degrades the environment, and deepens inequality.

·       Prioritise adaptation efforts with appropriate support to the vulnerable countries with the least capacity to adapt. And to vulnerable groups, including indigenous peoples, women and children.

3.4 We call upon corporations, finance, and the business sector to –

·       Shoulder the consequences of their profit-making activities, and take a visibly more active role in reducing their carbon footprint and other forms of impact upon the natural environment;

•       In order to mitigate the environmental impact of their activities, commit themselves to 100 % renewable energy and/or a zero emissions strategy as early as possible and shift investments into renewable energy;

•       Change from the current business model which is based on an unsustainable escalating economy, and to adopt a circular economy that is wholly sustainable;

•       Pay more heed to social and ecological responsibilities, particularly to the extent that they extract and utilize scarce resources;

•       Assist in the divestment from the fossil fuel driven economy and the scaling up of renewable energy and other ecological alternatives.

3.5 We call on all groups to join us in collaboration, co-operation and friendly competition in this endeavour and we welcome the significant contributions taken by other faiths, as we can all be winners in this race

He (God) wanted to test you regarding what has

come to you. So compete with each other

If we each offer the best of our respective traditions, we may yet see a way through our difficulties.

3.6 Finally, we call on all Muslims wherever they may be  –

to tackle habits, mindsets, and the root causes of climate change, environmental degradation and the loss of biodiversity in their particular spheres of influence, following the example of the Prophet Muhammad (peace and blessings be upon him),and bring about a resolution to the challenges that now face us.