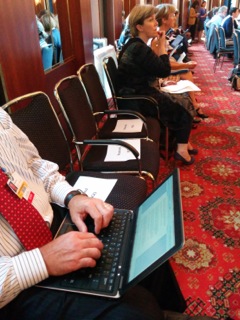 Parties might be wondering about those empty seats in the recent ADP contact-group meetings and noted the absence of NGO observers.

ECO doesn’t want you to worry, NGOs were there… well, two of them, representing Climate Justice Now! and Climate Action Network. Both have been allotted a grand total of 2 (yes, that’s two) seats for the ADP contact-group meetings, on behalf of more than a thousand member organisations. Two (luckily very committed) note-takers have been there to observe, what will shape the future of everyone, what’s going on inside and reporting back to the rest of the world locked out of negotiations.

In order for you to identify the CAN observer in the room, ECO has this handy photo for you, although, it probably wouldn’t have been hard to spot amongst all of the empty seats anyway…

ECO finds this to be extremely unfortunate, to say the least. Space constraints have been cited as the reason, and civil society participation has been downsized to fit within the designated space. ECO believes it should work the other way round: the space should be sized according to the overall need, which includes civil society participants just as much electricity, bathrooms, the stale sandwiches and over-priced coffee required for talks to function effectively. At least, that’s how civil society participation in the UN system has worked for many decades.

Observers’ suggestions to use CCTV in an overflow room have not been taken up, on grounds of, again, alleged budget and space availability. ECO notes that, for at least yesterday, the plenary hall wasn;t in use during the late afternoon’s ADP contact-group meeting in Room Bonn. ECO has heard rumours that smaller rooms, with little civil society participation, are being seen by some as more conducive to constructive discussions. ECO agrees there may be times when such closed-door meetings can help,but that reasoning mustn’t be used as a pretext to establish a general practice of excluding all but two colleagues of environmental NGOs from regular contact-group meetings.

ECO suggest that Parties look, again, into their purses to ensure that at the next session there are no holes in the budget holes. Come on, you want to be scrutinised. That’s what you’re always telling us!