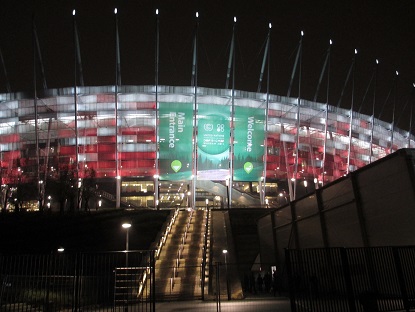 As COP 19 ended, I have to admit that it does not deliver the things that I would expect it to. Some say I probably have more expectations than the others. I have so much faith on the ADP track, as since it was first launched in Durban, I see quite some progress on the process. But then again, the result of the ADP in COP 19 does not really fulfill my expectations, where I’m expecting more clarity on a pathway to increase the ambition in pre-2020 period. The fact is, there is nothing promising in the text; at least not to increase the ambition, but rather it opens more opportunity to increase emission.

The most interesting part is as ADP open-ended consultations were (supposedly) always open for the observers, the fact was all the meetings became partially closed. Partially closed means that the open-ended meetings suddenly closed to observers because of the room capacity. I have never in my life been attending a COP where observers have to stand in line, waiting for their turn to be in an open-ended consultation. Where’s the room for NGO participation then? Probably some Parties just don’t want to be awarded fossil.

Although the results were not as I expected, I still have belief in this multilateral process; that it would finally come up with ambitious and concrete activities that could safeguard the world from the destructions caused by climate change. The current available multilateral process such as the UNFCCC is the only media for the whole countries in the world, to together sit and reflect, to achieve one goal; the ultimate goal of the Convention.

Now that Parties have gone back to their own countries, the battle would be in the domestic work. For developed countries, how to convince the domestic government to put more pledges in terms of finance and emission reductions, despite of the economic crisis or domestic politics that seem not in favor of such ambitious actions (at least this was their greatest worry and excuse of not putting any pledge). But, having concrete actions today, would result in a lower cost of actions for tomorrow, rather than to do that in the next years. Increasing the use of renewable energy as well as energy efficiency measures domestically will be one good and feasible choice to be done by developed countries at this point. Or reforming the existing production side of fossil fuel subsidies, will be a great example. Not only that the money can be used for energy efficiency measures and renewable energy activities to be conducted, but by reforming the fossil fuel subsidies will give more favor to energy efficiency measures as well as the renewable energy activities. Having said that, this will cause emission reductions.

COP 19 may be over; but the real homework lies in each individual countries. Winning the heart of parliament at home for instance, to get a positive political mandate from the government in the international fora, is definitely the greatest battle of all. But that’s where the ambition should start from; from the political will to achieve the ultimate goal of the Convention, with developed countries as the leading Parties just like what the Convention states.