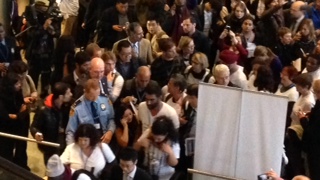 Image: Saleemul Huq
Whether inside or outside, civil society's message to ministers is clear: 'Do your job and save the climate!'

Last night, negotiators completed comments on the second version of the ADP co-chairs' proposed decision text and draft conclusions. The co-chairs did a skillful job of focusing the discussion on paragraph-by-paragraph textual comments, with only the occasional excursion  into recitation of well-known talking points.

It's clear there are still sharp differences amongst Parties on several issues. The co-chairs' task now is to capture compromises in the new version of their text this morning, and then try to resolve as many remaining differences as possible before sending their proposed decision and conclusions to the COP. That will leave Ministers with a handful of issues to address.

On the 2015 agreement, it's essential that Parties agree here in Warsaw on next steps in the process, including beginning work on a draft negotiating text at the ADP's next session in March in Bonn, and reaching agreement on the information that Parties should provide in their proposed post-2020 commitments no later than the second ADP session in June.

Those proposed commitments should be submitted by Parties in 2014 in order to enable a full and transparent review and allow for upward revisions in ambition by COP 21. The scope and focus of the review process should be agreed in advance of the submission date, so Parties know how their proposals will be judged against each other in terms of equity and fairness, as well as how far the aggregate gets to the 2°C goal.

The ADP should also proceed with the workshop proposed for June on the methodological issues of equity and adequacy, drawing on analysis from the   IPCC and other experts. The workshop on the global adaptation goal should also be held next June.

India loudly proclaimed in yesterday's ADP session that they have long championed equity to be given full consideration in this process, and expressed amaze- ment that after feeling like a voice in the wilderness, interest has suddenly blossomed.

ECO is pretty amazed too – India has been raising so many concerns about the proposed equity workshop that it might be time to reconsider and instead work for a compromise that allows the workshop to proceed.

On pre-2020 ambition, Parties should indeed be ambitious in defining the scope of the ADP's work. Closing the well-documented gigatonne gap by 2020 will require greatly enhanced action on every front:

* All developed countries must enhance the ambition of their emissions reduction targets, and backsliding of the kind recently exhibited by Japan must not be sanctioned by the global community.

* Developing countries that have yet to make near-term emissions limitation pledges should do so, while those that have should implement them and wherever possible, broaden their scope.

* All countries pursue opportunities to ‘catalyze action in areas of high mitigation potential’, as the co-chairs' text puts it; this should include moving forward on the proposal from    AOSIS to move vigorously to exploit readily available energy efficiency and renewable energy technologies.

A notable development was the widespread support for the rapid ratification and entry into force of the second commitment period amendment of the Kyoto Protocol. And all developed countries – KP and non-KP alike – should bring enhanced mitigation commitments to the high-level ministerial dialogue envisioned for next June in Bonn.

Clearly there is much work to do. Parties must agree an acceptable ADP text here in Warsaw, and with that in hand, move forward to enhance pre-2020 ambition and ensure the adoption of a robust and comprehensive post-2020 agreement at COP 21. It’s time for negotiators and ministers to roll up their sleeves and get the job done.