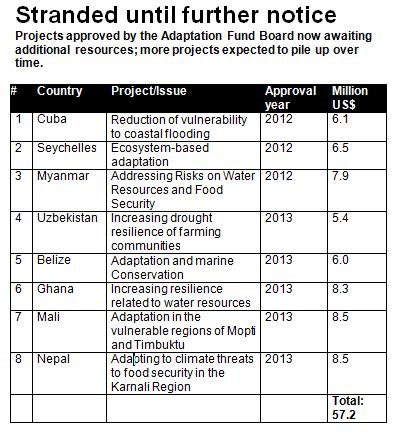 ECO wonders if developed countries are scheming to create suspense on the Adaptation Fund over the next couple of days, by orchestrating the announcements of their pledges to start with the lowest first: Norway’s  US $2.5 million was announced yesterday. While that doesn’t quite compare to Sweden’s  $30 million, we believe that every dollar counts. Perhaps we will now see a race to the top, with a string of pledges — each one higher than the one before — to reach and exceed the goal of $100 million before COP 19 is over. ECO is excited to see who will turn out to be the highest bidder.

Once again, falling short of the $100 million goal is simply not an option. Surely developed country ministers will want to make that possible, to demonstrate good faith and pave the way for the much larger goal of mobilizing $100 billion per annum in climate finance by 2020.

The argument has been made here and there that the Adaptation Fund is not quite empty yet.  Perhaps so for now, but not for long.  The Adaptation Fund Board predicts that it will run out of money over the course of the next year. And already there are stranded projects (see table nearby).