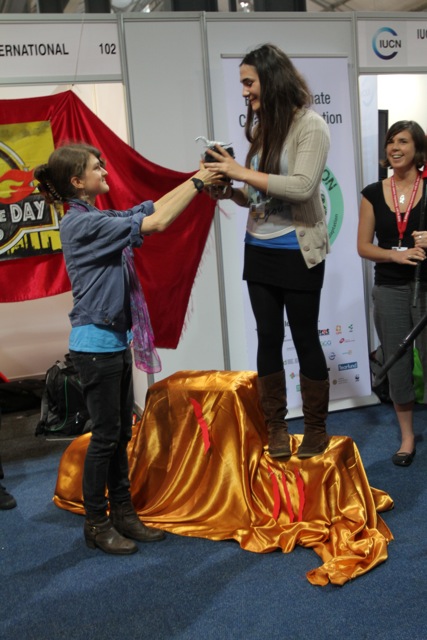 FOR IMMEDIATE RELEASE                                                         28 November 2011
Contact:
Kyle Gracey
kylegracey@sustainus.org
+27 799 129 153
Canada Wins 1st and 2nd Place Fossils – Threatens KP, Insults LDCs
Durban, South Africa – The first day of the United Nations climate change
negotiations started off badly for Canada. It earned the First Place Fossil of the Day
for failing to support a Second Commitment Period for the Kyoto Protocol, and
abandoning even its current participation in Kyoto. It also took Second Place Fossil
for insulting the Least Developed Countries, some of the nations that will suffer most
from Canada and other industrialized countries' greenhouse gas pollution. Rounding
out the awards, the United Kingdom received Third Place for helping to move tar
sands oil into Europe.
The Fossils as presented read:
“The 3rd place fossil of the day is awarded to the UK, following revelations that UK
Ministers have done a deal with the Canadian government to support the entry of tar
sands into the European fuel supply chain, undermining proposed provisions of the
European Fuel Quality Directive. The UK does not appear as frequently as Canada on
the fossil roll-call, but when they do, they do it in style. Despite claiming to be the
'Greenest Government Ever', the ruling coalition in the UK has become champion for
the world's dirtiest fuels.
The UK might have a different opinion from Canada on the value of the Kyoto
Protocol (we hope so), but there is one thing they can agree on – a Government's best
friend is its oil lobby.”
(over)
"The 2nd place fossil of the day is awarded to Canada following statements by their
environment minister that they are coming to Durban to “play hardball” with
developing countries. This quotation from Canadian Environment Minister Peter
Kent, doesn’t even require paraphrasing in typical fossil humour – it is sufficiently
outrageous on its own:
‘Emerging and developing countries need to stop “wielding the historical guilty card”
and asking for a free pass on emissions reductions just because in the past,
industrialized countries had more emissions than the rest of the world’.
Hands off, LDCs; that “free pass” on emissions reductions belongs to Canada!"
"The 1st place Fossil also goes to Canada. Although Canadian environment Minister
said he hoped to win less fossils then his predecessors, he is not off to a very good
start!
Canada has proven its fossil track record with 4 consecutive fossil of the year awards,
but if you can believe it, it seems they are even worse than we thought!
Environment Minister Peter Kent has articulated clearly that they will not budge with
international pressure on a second commitment period of Kyoto (a great attitude to
have in negotiations). This is unfortunately not necessarily a surprise, Canada has
been ‘separated’ from its Kyoto targets for years, but it seems they are headed for
divorce.
In fact, reports are saying that on Canada’s side it is already a done deal, and yet hear
they are, planning to spend two weeks negotiating a treaty they intend to soon
abandon.
This is a tough one for fossil because it is hard to joke about. Canada is here in
Durban in bad faith. Countries should be asking themselves why Canada is sitting at
the Kyoto negotiating table with a secret plan to formally withdraw from the protocol
mere weeks after the talks end.
This move is a slap in the face to the international community. Canada is further
isolating itself in these talks as a country that not only is refusing to take meaningful
action at home (tar sands anyone?), but also one that does not deserve trust and
respect from the international community here in Durban.
Shame on Canada."
_____________________________________________________________________
About CAN: The Climate Action Network is a worldwide network of roughly 500
Non-Governmental Organizations (NGOs) working to promote government and
individual action to limit human-induced climate change to ecologically sustainable
levels. www.climatenetwork.org
About the fossils: The Fossil of the Day awards were first presented at the climate
talks in 1999  in Bonn, initiated by the German NGO Forum. During United Nations
climate change negotiations (www.unfccc.int), members of the Climate Action
Network (CAN), vote for countries judged to have done their 'best' to block progress
in the negotiations in the last days of talks.
###