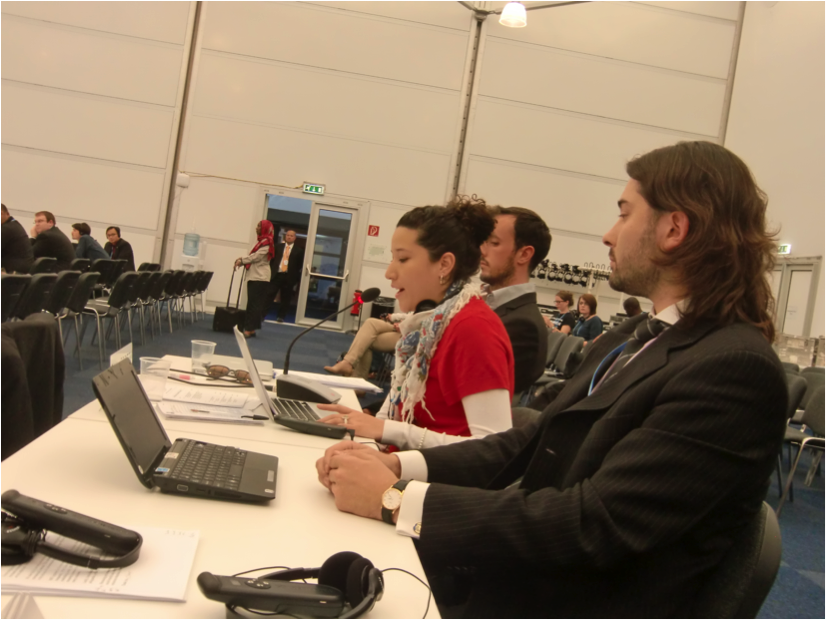 Mexico has been considered one of the most active players in the process of international negotiations on climate change in recent years. In Poznan, Poland during the Fourteenth Conference of the Parties (COP14), Mexico committed to cut its emissions to 50% below the 2002 level by 2050, while the government noted that Mexico’s emissions might be reduced to 30% below the 2000 level in 2020. Also under the discussion of the Copenhagen Agreement Mexico announced the reduction of 51 millions of tones in 2012 . These goals, which have been held by different actors, are aspirational; that is, they are subject to a number of conditions being met.

One of the major constraints that the Government of Mexico has highlighted is the financial constraint. According to the Mexican government, the aspirational goals will be met only provided that they receive international financial support to do so. According to the government, Mexico has sufficient political will but not the resources necessary to make the fight against climate change a reality in the country.

Mexico and many developing countries noted that the fulfillment of their goals depends on having access to international financial resources. However, for many students of the subject it has become clear that while the flow of such resources is necessary, the strengthening of national structures, development of plans and programs, cooperation, collaboration and coordination among stakeholders at national level is equally vital if you really want to advance in the field.

In the case of Mexico, it is clear that large amounts of money are required to invest in strategic sectors. However, the problem is not always a lack of resources —sometimes the fault lies instead in the management of existing resources.  Some researches  have raised a number of ways in which Mexico could achieve compliance with measures to reduce emissions and thus reduce the vulnerability to which it is exposed.

Because of that, I decided to work on this. For Mexico financing is one of the key elements for the transition from a highly polluting economy to one that is low-carbon and sustainable. But not only that, in Mexico, investment in and promotion of adaptation action is now an urgent priority, as several states are already living the impacts of the climate change (Tabasco, Oaxaca, Veracruz, etc).  Mexico must promote a financial system to attend to the full suite of climate problems that it is facing now.

In this sense the activities that I have been developing in the international negotiation have help me to understand the better way to help my country and to help the world. This Southern Capacity building program has been an excellent experience to share with colleagues from other southern countries our concerns and necessities in our region. In my point of view participating in this process gave us more details about the effects of the climate change in the world, and also gave us the opportunity to learn about the solutions that the countries are discussing, even in the backdrop of slow, frustrating, uncertain, and a really tiring negotiation process. It is exciting to now that we can participate as a civil society and that we can push for the creation of a solid and constructive perspective to take all of these information and put it in practice in our countries. Our job is basically to try and make things happens in the international level and again try and influence the national policy making process. We also need to consider other things such as legal framework and other important tools to make things happen back home.

With this experience I intend to strengthen the actions I am implementing within my country as Director of the Air and Energy Programme, including:

A.    International Negotiations of Climate change (2007-currently): This Project has as a goal to follow the Mexican roll in the negotiation, to evaluate the congruence between the national and the international policy in this matter, achieving:
➢    Building communication channel with high level decision makers on public policy and legal framework, such as the Mexican delegates of the United Nations (Ministry of Foreign Affairs, Ministry of Environment and Natural Resources, Ministry of Energy, Treasury, etc.) networking with legislative actors (Special Committee on Climate Change in High and Low Chambers, Environment Committee, etc.) networking with international organizations (Environmental Defense Fund, E3G, World Resources Institute, Oxfam International, Greenpeace International, etc.), as well as with academic institutions such as Technology of Monterrey, National University of Mexico, the Latin American Faculty of Social Sciences, the Centre for Atmospheric Sciences, among others, such as International Foundations.

B.    Climate Policy project (2008-currently work): This project has as a goal to promote a long-term national policy on climate change and a low carbon growth path. Some of the activities that I already undertook were:
➢    Promotion, analysis and enforcements of legal instruments (Law for the Use of Renewable Energy and Energy Transition and its regulations, General Law of Climate Change, etc.).
➢    Promotion, analysis, discussion and participation in public policy instruments such as the Special Programme of Climate Change (PECC Spanish version) and the Special Programme of Renewable Energy and Energy Transition. Creating a observatory to guarantee the compliance of these instruments.
➢    Analysis of the public policy and legal barriers to attend climate change with the National Ecology Institute in Mexico (current research).
➢    Consolidation of a dialogue on climate change with the Federal government and the legislative sector towards Cancun and beyond, for the fulfilment of the goals to reduce emissions in the Country (30% in 2020 and 50% in 2050).
➢    Consolidation of a social dialogue to promote a national policy on climate change.
➢    Promotion of a public policy package for the expansion of sustainable transportation in Mexico, including aspects such as the creation of a standard vehicle efficiency, public transportation such as Bus Rapid Transit systems (BRT's) and the introduction and use of clean fuels, mainly.

C.    Climate Finance: Financing the Changing without changing the climate (2009-current project):
➢    Creation of a network for the promotion of a financial architecture for climate change in Mexico with the participation of 15 organizations.
➢    Elaboration of an analysis of the Federal budget for climate change in 2011 achieving the assignation of 300 millions of pesos from the legislative power.
➢    Elaboration of a proposal text for the international negotiations in Cancun about the creation of the Green Fund including gender perspectives, a transparent system to ensure the use of the resources and a criteria methodology to invest in sustainable technology.

D.    Media Positioning: This project has as a goal the media positioning of our agenda to promote the sustainable development and the combat against climate change in Mexico involving media to make press , with this project we achieved:
➢    Transparency in the Mexican climate national policy, and the inclusion of the civil society in the discussion.
➢    Information dissemination about the importance of the sustainable mobility, the distribution of clean fuels, the publication of a vehicle efficiency standard, the use of renewable energy, and the energy efficiency as a tools to combat climate change.