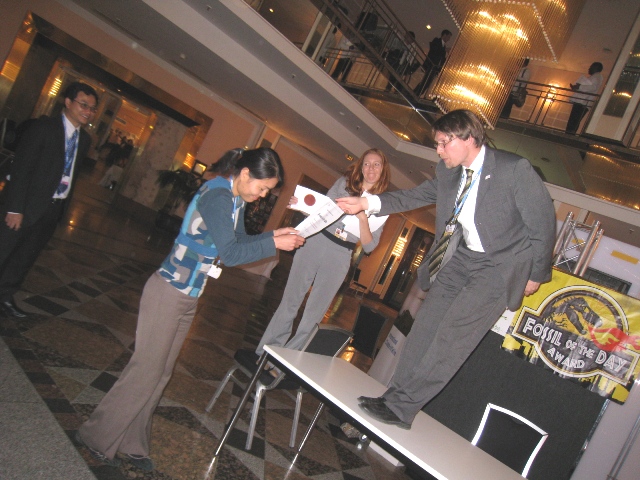 First Place Fossil is awarded to Japan. Today Japan reiterated their position of
supporting the inclusion of nuclear facilities to CDM. Today, June 11th, the three-
month anniversary since the tragic earthquake and the Fukushima nuclear disaster,
saw thousands of Japanese people demonstrating against nuclear energy in more than
100 cities all across Japan.  It is hard to believe that Japan has not changed its position
of including nuclear facilities into CDM, even after this tragic event. We urge Japan
to listen to its own people and come up with a new position right away. Japan can
actually lead the discussion and persuade others to exclude nuclear from the CDM!

The second placed fossil goes to…well we aren't exactly sure.  Flying in the face of
enhanced NGO participation, an important focus of this session, and the mantra of
transparency, 'an unknown Party or group of Parties' approached the Chair to block
the valiant efforts of Ambassador De Alba to open the LCA informal on legal issues
on Friday afternoon.  Not only do we need fair, ambitious and legally binding efforts
to save our dear planet, those discussions should take place in an open and transparent
manner.  Just as we have supported the call for Parties not intending to commit to a
second commitment period of the Kyoto Protocol to come clean with their intentions,
we expect the same level of transparency with respect to legally binding intentions
under the LCA – and that starts with opening the informal to observers.  For your non-
transparent ways, this Party or group of Parties gets an Anonymous Fossil. Is anyone
willing to accept the award?


About CAN: The Climate Action Network (CAN) is a worldwide network of roughly
700 Non-Governmental Organizations (NGOs) working to promote government and
individual action to limit human0induced climate change to ecologically sustainable
levels. www.climatenetwork.org

About the fossils: The Fossil of the Day awards were first presented at the climate
talks in 1999, in Bonn, initiated by the German NGO Forum. During United Nations
climate change negotiations (www.unfccc.int), members of the Climate Action
Network (CAN), vote for countries judged to have done their 'best' to block progress
in the negotiations in the last days of talks.