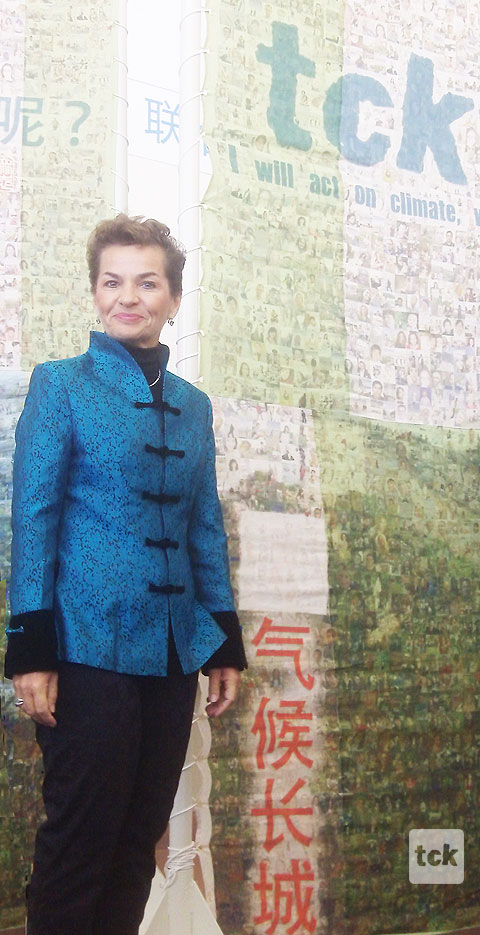 In a gesture that signaled more urgent engagement to cool the planet, UNFCCC executive secretary Christiana Figueres opened the first international climate conference in this country by sealing the symbolic Great Climate Wall of China, a mosaic wall of 4,000 photos of people from China and around the world who are concerned about our warming planet.

The executive secretary received a traditional Chinese stamp from 13-year old Ji Mengyang of Tianjin and Chung Jahying, a Chinese youth representative of the Great Green Initiative.  The stamp has the Chinese proverb: ‘With everyone’s determination, we can win anything’.

Ms. Figueres noted, ‘Addressing climate is not just about governments making the decisions they need to make, it’s about each of us individually having the determination to change our behaviour in our lives. And it’s also about all of us collectively deciding about what kind of stamp we want to leave on the wall of human history.’

This event, sponsored by the Global Campaign for Climate Action (GCCA), Tck tck tck and Greenpeace, showcased the latest example of art for the public interest by the Great Climate Wall’s creator, 26-year-old sculptor and fine artist Joseph Ellis.

An American raised in upstate New York, Ellis has lived and worked in Beijing for five years, during which he became the first Westerner to graduate from the Central Academy of Fine Arts’ prestigious sculpture program.  Greenpeace worked with Ellis two years ago to design an hourglass presented to US Secretary of State Hilary Clinton during a climate event at the US Embassy in Beijing. In 2009, Greenpeace commissioned Ellis to execute 100 life-size sculptures of children carved from ice for another climate action.

To create the Great Climate Wall of China, Greenpeace and other NGOs collected snapshot portraits, which Ellis assembled into a mosaic to form a dominant image of the real Great Wall. He printed the impressionist mosaic on fabric, fitted it to supports and assembled the display in side-by-side units to build a tall, colorful barrier with a direct message: ‘I will act on climate, will you?’

The entire project, start to finish, was completed in six days. ‘It’s amazing what you can do in China in just under a week. The people here are incredible and the resources at my disposal never cease to amaze,’ said Ellis.  ‘When we combine our efforts, the chance for change is in our grasp.’

The Great Climate Wall shows just a small portion of the growing global movement of people who are ‘rolling up their sleeves and getting on with it’.  The current wave of action peaks on October 10th with the 10/10/10 Global Work Party with over 7,000 events in 180 countries.  This will be followed by a flurry of activities driven by the development and anti-poverty groups in the GCCA alliance.

The negotiations in Tianjin must make headway and lay the groundwork for breakthroughs on these issues in Mexico this December.  So, dear negotiators, what stamp will you leave this week on the wall of
human history?